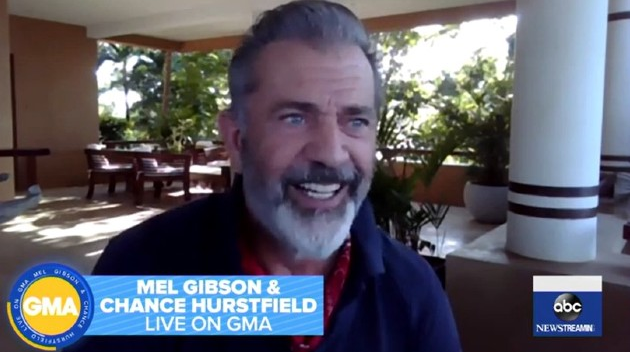 EARLIER First, let’s ask: why is Mel Gibson welcome on “Good Morning America”? A noted racist, Gibson was allowed to promote his flop, “Fat Man,” with Michael Strahan, a Black man who should know better. I can’t imagine Robin Roberts getting that interview. She’s at least a journalist.

Yet, there Gibson was back on “GMA” pushing “Fat Man,” which made $140,000 in theaters last week and has the usual terrible reviews. This time he was accompanied by the obnoxious 15 year old from the movie, Chance something. I cannot stand this kid. On “GMA” he rattled off his rote PR notes like a pro and it was scary. He talks like he’s been programmed by a studio brainwashing team.

Three years ago Gibson appeared on “GMA” to tout “Hacksaw Ridge.” He told them then that “Lethal Weapon 5” was in the works. This week, Strahan asked him again about a movie that will never happen. This time Gibson said it was definitely happening and that Richard Donner. age 90, was working on it.

Though we all love Dick Donner, this is not going to happen for so many reasons. First of all, there’s so sign of it “in the works.” Second, the new people at Warner Bros. aren’t stupid. They would never invite that kind of bad PR. Also, Danny Glover? He’s 74, and looks it. He’s not running around, even for stupid money. And then there’s Mel, who’s box office poison, and human poison.