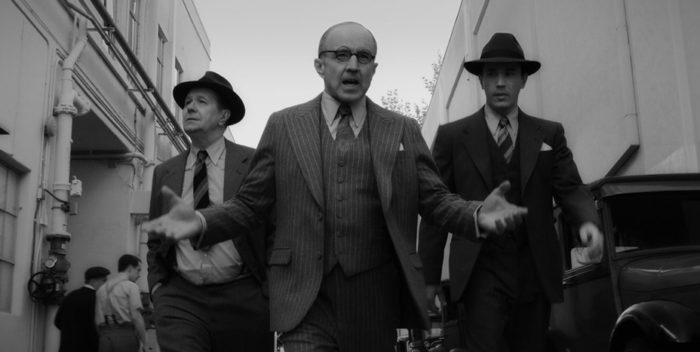 The review embargo has lifted for “Mank,” a movie that Film Twitter wants so badly they can taste it. David Fincher directed it from his own later father’s screenplay, the story of fabled Hollywood screenwriter Herman Mankiewicz. “Mank,” as his frenemies called him, shared screen credit with director Orson Welles for what is considered the greatest film of all, “Citizen Kane.” How much of it did he write? Welles and Mankiewicz are still fighting about it to this day high above us.

The movie is expertly and smartly directed by Fincher, with gorgeous cinematography from Erik Messerschmidt. It’s all black and white with sensational richness of tone and much texture in every shot. The costumes, the whole production is top notch. You feel as though you’re in Sam Simeon, aka the Hearst Castle, as Mank inveigles himself into the lives of the people who will be represented in “Citizen Kane” starting with William Randolph Hearst (Charles Dance) and Marion Davies (Amanda Seyfried, guaranteed nominations and a NY Film Critics win for Best Supporting Actress).

Yes, we get to meet all these Hollywood heroes and villains of the time including an astounding performance by Arliss Howard as studio chief Louis B. Mayer (again, supporting nominations everywhere). Tom Pelphrey continues his at-last overnight sensation career (10 years in the making) as Mank’s actually talented screenwriter brother Joe; Joseph Cross is equally good as Charles Lederer; and I really liked Tuppence Middleton as Mank’s long suffering wife, Sarah, Lily Collins makes a fine foil as Mank’s secretary.

But it all rests on Gary Oldman, who creates this complex, if fairly unknown, historical figure. Oldman is always note perfect and he’s no different here. Mank’s ego, his drinking and excesses, his genius juxtaposed with his inability to comprehend normal manners, all of it Oldman gets on the nose. Mank is an unlikable guy and Oldman really conveys that, too.

But how much of this is just a tempest in a teapot? For film fans, cinephiles, and so on, this saga is like catnip. For the uninitiated, however, I don’t know how much of “Mank” will resonate.  A black friend of mine, who loves movies, asked me recently, “Who are all these people?” That’s a good question. Film reviewers take all this stuff about Kane, Welles, Hearst and co. for granted as canon. But for the general population, this is of limited interest. The screenplay doesn’t help. It just assumes the viewer knows this story and is happy to see it dramatized.

But that doesn’t diminish the achievements here. Still, I think “Mank” will benefit from being on Netflix and not competing for box office. It doesn’t need that pressure. It just needs to be enjoyed by its fans.