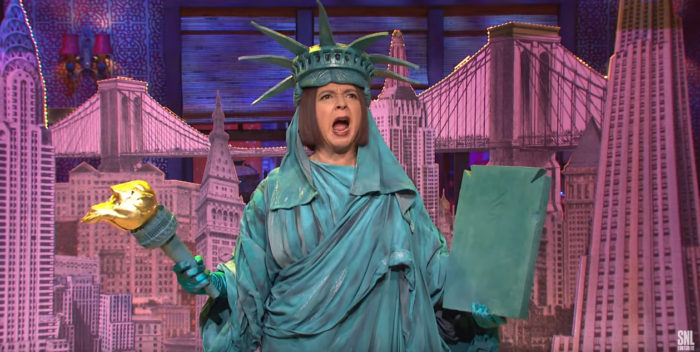 John Mulaney restored “Saturday Night Live” to its past glory when he hosted the show last night for the second time in 2020, and his fourth time overall.

Among Mulaney’s many talents is his execution of mini Broadway shows. He loves musicals. Last night’s New York musical, 8 minutes long, is capped by Maya Rudolph dressed as the Statue of Liberty performing a parody of Stephen Sondheim’s “I’m Still Here.” It’s absolutely brilliant. Rudolph was hired this season to play Kamala Harris, but she’s been doing skits in every show, subbing for AWOL cast members Cecily Strong and Aidy Bryant. (Much missed, they are off shooting other shows for a bit.)

Rudolph is just sensational. A much beloved recent Emmy winner, she has a great voice. But why not? Her mother was the late great singer from the 70s, Minnie Riperton, who died way too young. She’d be proud of her daughter. Rudolph will win another Emmy hands down with this performance.

PS Mulaney’s love of musicals can also be seen in his parodies on “Documentary Now” for IFC Channel. Check them out, particularly his take on DA Pennebaker’s making of Sondheim’s “Company.”

Maya comes in at 4:28. PS Whoever’s producing the virtual Tony Awards should re-create this.