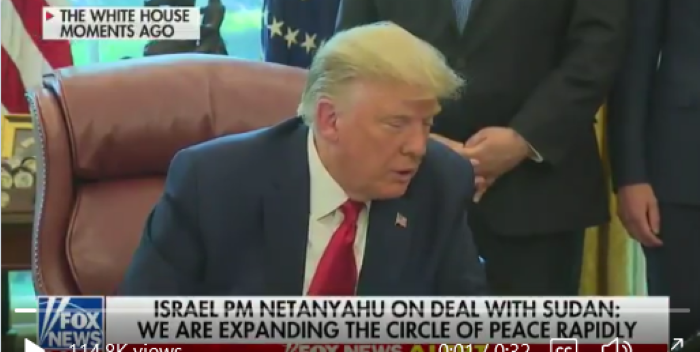 Donald Trump was on a speaker call today with Israeli PM Bibi Netanyahu. Trump called Joe “Sleepy Joe” and tried to get Netanyahu to support his mockery of the Democratic Presidential candidate. The event in the Oval Office was to announce normalization of relations between Israel and Sudan. Listen as Bibi — knowing reporters are in the Oval Office– refuses to do this, and won’t play along with Trump’s game.

Trump: “Do you think Sleepy Joe could have made this deal, Bibi?”

Netanyahu: LONG PAUSE “Well, Mr. President, one thing I can tell you is we appreciate the help for peace from anyone in America.”

Add Netanyahu to a long list of politicians who are no longer kowtowing to Trump’s childish name calling and disrespect of others.

Trump tried to goad Netanyahu into echoing his crude attacks on Joe Biden — but Bibi wouldn't do it. He's probably looking at the same polls we are. pic.twitter.com/m66xWoekWb