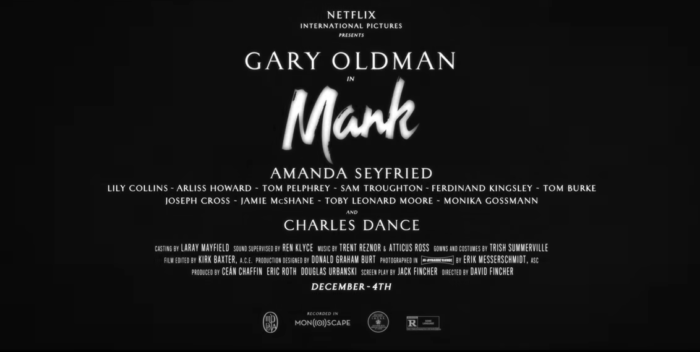 David Fincher‘s “Mank” is a much hyped and anticipated Netflix film about Herman Mankiewicz, Oscar winning co-writer of “Citizen Kane.” His brother, Joseph Mankiewicz, won four Oscars in writing directing each “All ABout Eve” and “Letter for Three Wives.” Herman aka Mank was more of a Hollywood character. He drank and caroused and had a great time until he didn’t. Gary Oldman fills his shoes. Tom Pelphrey, who’s thisclose to being a star, plays Joseph. Pelphrey is coming off a stunning season on “Ozark.” He’s waited 10 year since leaving the CBS soap “Guiding Light” to become an overnight sensation. Lily Collins and Amanda Seyfried co-star.

“Mank” is incredibly popular with the folks on Film Twitter, who want it to win a lot of Oscars. The good news is it’s on Netflix and not in theaters so box office won’t be an issue. The trailer is really cool, and I loved the graphics. PS Yes, Josh Mankiewicz of TCM fame is Mank’s grandson, as is NBC’s Josh Mankiewicz. (They’re brothers.) Someone, somwhere is working on a parody song called “Manks for the Memories.”