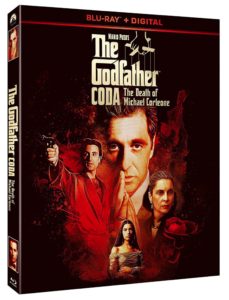 Now called: “Mario Puzo’s The Godfather, Coda: The Death of Michael Corleone,” Coppola’s re imagined film is priced to sell at just $14.99. That price seems very low considering it’s an event release of something that’s highly anticipated. But I guess they figure we know the story already.

“Coda” will give Coppola to right the wrongs of the original, awful final chapter of “The Godfather.” It would be unprecedented if he fixed “III” so that it really fit with chapters 1 and 2. This could be the great director’s crowning achievement.

The original film clocks in at 2 hours, 42 minutes. The new one says 2 hours, 38 minutes, so maybe 4 minutes have been trimmed. We’ll have to wait and see. Release date is December 8th.