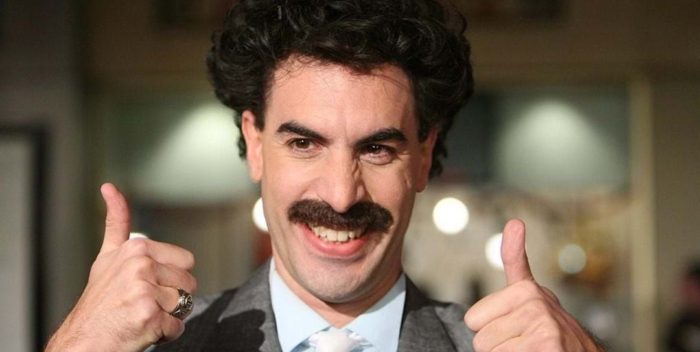 Sacha Baron Cohen’s “Borat” sequel is coming to Amazon Prime next month, and just enough before the election to do some damage.

“Borat: Gift of Pornographic Monkey to Vice Premiere Mikhael Pence to Make Benefit Recently Diminished Nation of Kazakhstan” is the title, and featured politicians who will be mocked include Mike Pence and Rudy Giuliani. There will be more, hopefully, and it will be hilarious torture watching them be destroyed.

Who’s not in the movie? As I reported a couple of weeks ago, Ken Davitian, who played Azamat, Borat’s sidekick in the first film, was not asked to return. It doesn’t sound like anyone from the original film is back.

Indeed, “Borat 2” sounds like it’s a big screen version of “Who is America,” the Showtime series Cohen commanded a couple of years ago, with Borat as the main character. So this will be less a fictional narrative, as “Borat” was, and more of a ‘gotcha’ kind of show.

Either way, “Borat 2” will have maximum exposure on Amazon Prime, which needs an original hit and eyes on their platform. Jeff Bezos, no fan of Donald Trump, I’m sure was instrumental in getting this film for his studio.

PS Meantime, Cohen gets kudos for his role as Abbie Hoffman in “The Trial of the Chicago 7,” coming to Netflix October 3rd. All of of October will be Sacha Baron Cohen Month on streaming. Niiiice!

Congratulation to great friend of the Kazakh people @realDonaldTrump for winning debate today! Impressive and amazing result for a strong premier who always put America and Kazakhstan first! pic.twitter.com/qLljQ8b5UU