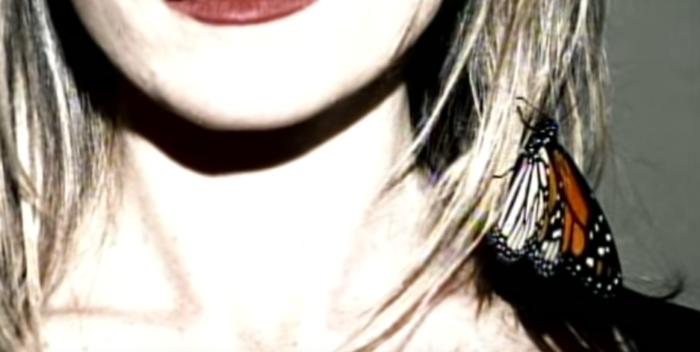 Exclusive: Here’s the video for “Demented,” a song from Mariah Carey’s “secret grunge album.” Yesterday on Twitter Mariah revealed she made an album called “Someone’s Ugly Daughter” with a group called Chick back in 1995. It was on the Sony label, recorded at the time Mariah was making the “Daydream” album, and disappeared quickly. The video has 29,990 views on YouTube, posted October 25, 2009. I guess the numbers will take off now. I

Mariah says she sang with a friend named Clarissa, I don’t know if that’s her in the video or an actress. If anyone knows who she is, shoot me an email at showbiz411@gmail.com. The video for “Demented” looks like a parody of Blondie, circa 1979. It was definitely shot on Canal Street in New York in 1995, you can tell because Uncle Steve’s stereo store is in the shot. There’s a clue that Mariah was involved– a red butterfly makes a nano appearance.

The album — which sounds like Courtney Love and Hole — contains a cover of Cheap Trick’s “Surrender.” It was released on August 22, 1995, recorded at the Hit Factory, the studio where Mariah made most of her albums in the 90s.

Mariah posted a video to YouTube over night for fans of a medley of the songs. The album is unavailable now. There’s one copy selling for $975 on amazon. This is all to promote Mariah’s memoir, published tomorrow, called “The Meaning of Mariah Carey” from Andy Cohen Books (I’m not kidding).