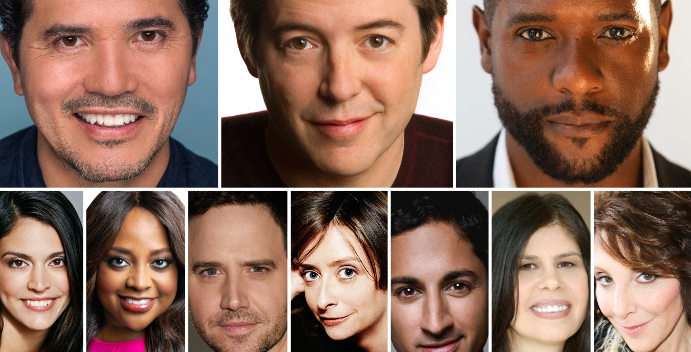 The Hamptons season would not be eh, “The Season” without all-star comedy from Eugene Pack. He’s the guy who created the hilarious annual staple, “Celebrity Autobiography.”

Pack is back! This Sunday he’s premiering, “The Pack,” a program of three new works to benefit Guild Hall, starring Matthew Broderick and John Leguizamo performing together for the first time. The rest of the cast is pretty impressive:  Blair Underwood and Sherri Shepherd, “SNL” stars Rachel Dratch and Cecily Strong, two time Tony winner Andrea Martin, plus Tony winner Santino Fontana and “30 Rock” star Maulik Pancholy. Be on the lookout for the talented Dayle Reyfel. The plays inaugurate the final leg of a play series that will include some live, distanced, performances in the Guild Hall garden, all sold out.

Reached by phone in Los Angeles, playwright/ performer, Eugene Pack said he is busy bringing actors together, but he wants everyone to know “The Pack” owes more to film, although it sounds more like an innovative hybrid, reflecting our current states of creativity.

The elements, familiar from his popular “Celebrity Autobiography” evenings, line up nicely: Broderick and Leguizamo are filmed together (but separate) in a coffee house. For the first, Underwood and Shepherd are on the phone for the second, and in the third, Dratch, Strong, and co. are on Zoom. What could be more representative of this moment? The fun is, says Pack, “You click on the link and watch as a shared experience. Now more than ever, even more so, we can see what can be done with these actors. The big challenge was the time restraint. We have great material, but had the actors only for an hour, and they are perfect for this experience, a short comedy form, not a staged reading.”

So how does he direct remotely? “I can see everyone watching each other. I give notes to the actors and editors, stage managers and producers.” Inspired by the podcasts he makes in LA, starring the many actors he has brought together over the years, The Pack may be an experiment in entertainment, and a way to keep us laughing.

PS East Hampton’s Guild Hall is like every other local theater around the country. They need money to stay afloat during this crazy time. But they’re certainly putting on an inventive summer. You can still buy tickets to watch Julianne Moore and Alec Baldwin in Bob Balaban’s staged reading of “Same Time Next Year” by clicking here.