Kanye West‘s 99th nervous breakdown continues apace. Working up to his album release on Friday (maybe, who knows, maybe he’s imagining it), Kanye has continued his Twitter rant marathon. In these deleted tweets from last night he calls his mother in law “Kris Jong Un” and claims his family tried to commit him with a 5150 hold. He also thinks wife Kim Kardashian is having an affair with Meek Mill.

Meantime, the Kardashian PR feed has noticed that the family of avaricious, self-promoters has uniformly “unfollowed” their pal, Scottie Pippin’s estranged wife, Larsa. Is it true? Is this all made up for the new seas on of “Keeping up with the Addams Family”? Who knows? These people would say they tried to abort one of their kids to get ratings.

Kanye remains in Wyoming, which he obviously bought and developed to get away from the Kardashians, because who wouldn’t? With theaters closed, no Broadway or new movies, soap operas in reruns, this is all we’ve got now, kids. 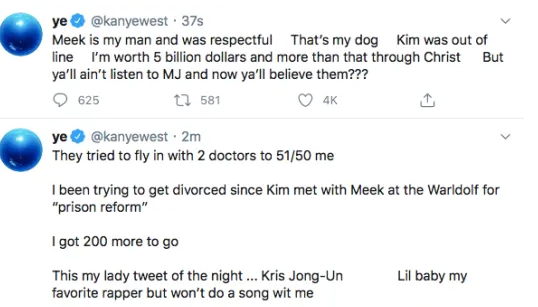