Trump wrote: “These THUGS are dishonoring the memory of George Floyd, and I won’t let that happen. Just spoke to Governor Tim Walz and told him that the Military is with him all the way. Any difficulty and we will assume control but, when the looting starts, the shooting starts. Thank you!” 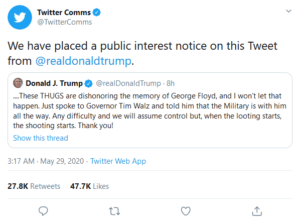 This is now a war between Trump and Twitter, and all social media as witnessed by last night’s clearly unconstitutional Executive Order. And this is only the beginning because Facebook and its creator, Mark Zuckerberg, are squarely in the middle of this. So far Zuckerberg has failed his customers in what seems like support of Trump. The wave of sentiment against Facebook could grow stronger in just a short time.