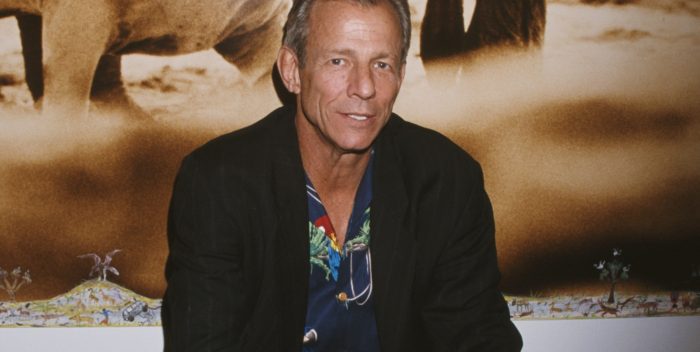 The tragic story of Peter Beard‘s disappearance was a lead in this week’s New York Times arts section. Now some ten days after he vanished, and search parties including helicopters have given up their trawling the rocky coast, the erstwhile adventurer has just turned up. Some supposed he went into the sea, lunch meat for sharks, if there are such fish at these shores, or he’d gone into some secret corner of the woods, and like Beat poet Neal Cassady, another legend, died of exposure. No body, no news. But now all that may change.

The East Hampton Star reports that police found a body today in the Montauk woods matching Peter’s description. “Town detectives were called after a hunter familiar with the woods off Old Montauk Highway near Montauk Point found a piece of clothing that matched what Mr. Beard had been wearing on March 31. Police searched the area and eventually found what they believed was Mr. Beard’s body.”

Peter Beard occupied the last house on the East End, and from his perch the expanse of the Atlantic Ocean is compelling. Having made art, collages and photography for decades, both here and on exotic travels, and featuring an array of celebrities including Mick Jagger, Jerry Hall, Bianca Jagger, Lee Radziwill, the two Edie Beales, Karen Blixen, Kamante Gatura, his wife Nejma, and himself often with his head in a fish, he’s taken more than a note about fame from Andy Warhol, his erstwhile neighbor.

The Times retold an anecdote about Beard, that while working in the city, when he was told his house had gone up in flames, he just continued his work. What the Times failed to say, and what might merely be Montauk rumor, was that the house had been burnt down by workers, locals disgruntled that they had not been paid. Legends abound about such the adventurer: some saw the house lifted off the nearest cliff by Sikorsky helicopter, moved to the most remote point, a piece of property jutting farther into the sea than the lighthouse.

At the East Hampton Guild Hall’s 2016 exhibition, “Last Word from Paradise,” celebrities and animals mixed it up: there’s more than a hint of nostalgia for travels to remote places. Peter  held court in the garden, warmly greeting guests in a blue linen shirt. Beard’s artwork juxtaposed party photos from Studio 54 with pictures of endangered animals like the elephant, or alligators that live best in the wild suggesting lost worlds: What about precious, fragile Nature on our planet?

Jackie Kennedy’s now recently deceased sister, Lee Radziwill, who Peter famously dated, paid homage to Beard in her final book Lee (Assouline, 2015): “Peter Beard changed my whole life. He opened up so many windows for me, because he taught me to be insatiably curious.” At the time he was living between America and Africa often taking people out on safari: “Peter thought of everything as a photograph.” Displaying each of his worlds, the Guild Hall show was a valuable documentation of imperiled beauty.

If the reports are right, the saga is over. Condolences to his wife, Nejma, daughter Zara, and Peter’s family and followers around the world. He had a stunning life.