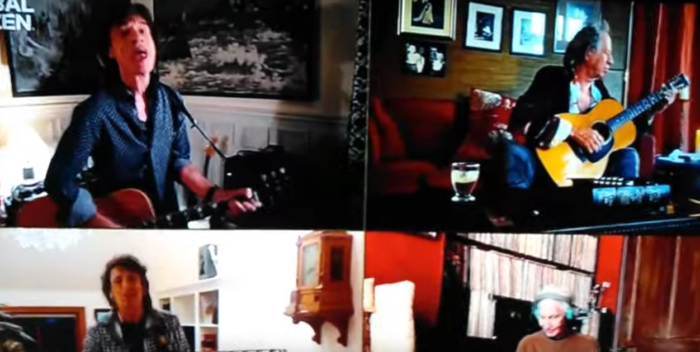 So what about this two hour all network concertcalled “Together at Home” put on by the World Health Organization and Global Citizen?

Lady Gaga organized it. Her opening rendition of Charlie Chaplin’s “Smile” was for the ages. She is such a gifted singer. Just lovely.

Well, JLo was the only artist who lip synched to track. Her thin voice was no match for “People” or Barbra Streisand. This was a bad idea.

The Rolling Stones stole show with “You Can’t Get Always Get What You Want.” Their number had the most vibrancy.

Paul McCartney and Stevie Wonder, as well Elton John: each terrific. McCartney was very charming. Stevie looked and sounded good six months after his kidney transplant. Elton is a force of nature.

Keith Urban’s triptych was a great idea. “Higher Love” was a very good choice, and it was swell to see Nicole Kidman.

Billie Eilish– sing out, Louise. No one could hear you. And are the Emo Carpenters now called Billie Eilish and Finneas, like the Captain and Tennille? Poor Finneas.

Lizzo was so good on Sam Cooke’s classic “A Change is Gonna Come” I got goosebumps. But why no Jennifer Hudson? Were they two scared?

Eddie Vedder was just fine. Taylor Swift was not. Who was she auditioning for? How ’bout mic? A light? An amp? Something?

Lopez holds the mic close to cover her not singing, a track swells around her. Or am I missing an orchestra in the room?

And meantime. Kenny Babyface Edmonds and Teddy Riley did their own show on Instagram. See below

Hope y’all ready! Tag me on your dress up pics!! #Repost @therealswizzz • • • • • Getting ready for @teddyriley1 vs @babyface tomorrow 9pm est on insta Live 👀 What are you wearing to the event ? Tag #verzuz with your fit!