The gravy train may be over for amFAR. All that swanning around at the Cannes Film Festival in specially marked cars with drivers, the incredible hubris of CEO Kevin Frost and his minions, face a certain extinction.

Revenue and net assets for 2018 — the first year they operated without Harvey Weinstein and Kenneth Cole — were way way down.

On their Form 990 for 2018, under revenue, contributions and grants fell by eight million dollars from 2017.

Most of amFAR’s income revolves around their big Cannes fundraiser. But this year, there is no Cannes, and no fundraiser. There are no other fundraisers in exotic locales, where amFAR for 20 years has been flying celebrities to pump up their image. The parties are over.

The latest tax filing covers the period from October 1, 2017 to September 30, 2018. That lines up exactly with Weinstein’s fall from grace and the revelations of his auction scandal involving his musical, “Finding Neverland.” With Weinstein, and then Kenneth Cole, out of the picture, amFAR’s celebrity quotient collapsed. It was obvious that all their parading around Cannes, spending money, and not worrying about the consequences, would have an unhappy conclusion.

amFAR was also paying around $1.8 million for event production to two different firms. That also should be under re-evaluation.

All together, amFAR claimed a loss of $13 million for all its fundraisers, most especially the Cannes event for May 2018. 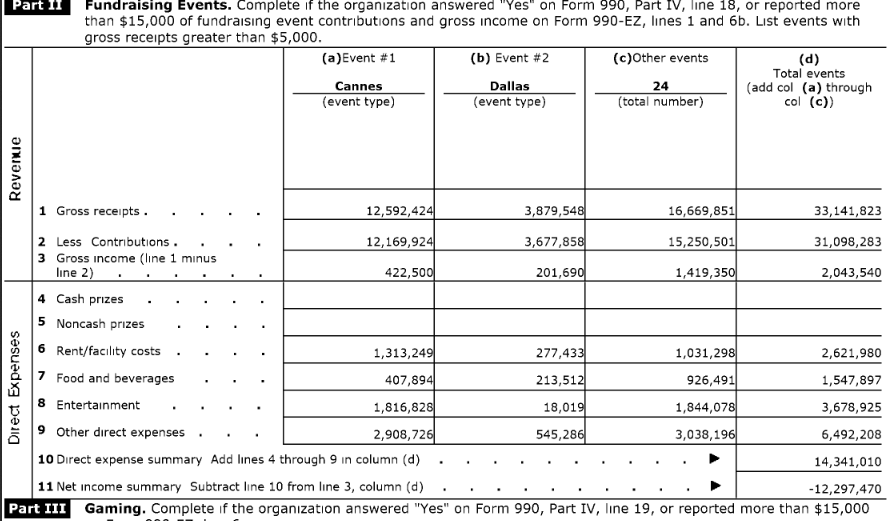