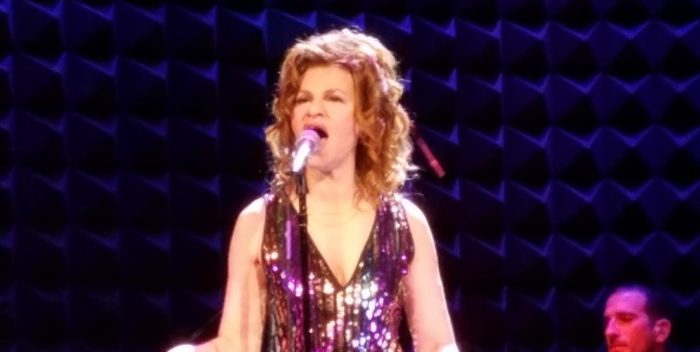 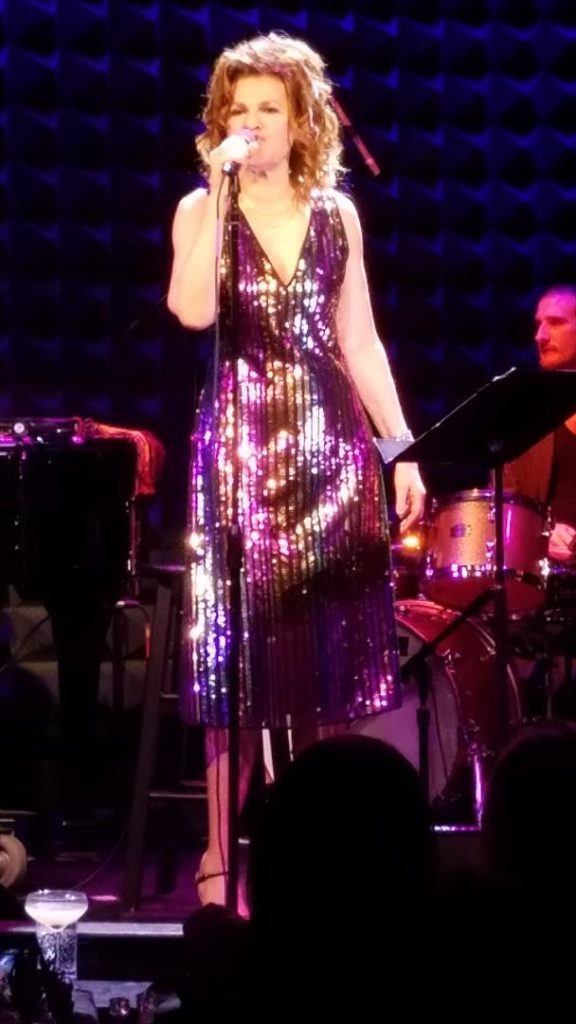 “Welcome to Kremlin West!” Aglitter in a sequined sheath, Sandra Bernhard took the Joe’s Pub stage like a bat outta hell, that is a rock goddess, belting Bobby Womack’s “Across 110th Street,” backed by her first-rate Sandy Squad Band. On this, her tenth anniversary celebration doing New Year’s at this venerable Village venue, she’s a one woman celebration, featuring fresh snark and keeping it true.

Taking a break from filming “Pose,” (–oops, “did I drop Pose. That’s so unlike me.” Bat bat bat.), she tips her hat to the queens Olivia Coleman, Nancy Pelosi, and Nicole Wallace. Mashing up the Zeitgeist, she reveals our inner angst over the ecology, the president, Walmart, Blue Apron.

The passing of Barney’s department store  had her rushing back to Mount Sinai for further tests! Oh, she’s well connected and drops names like gumdrops: Barbara Streisand, Chrissie Hynde, Carole King, Emma Stone, Debbie Harry, Julianne Moore—as if we too know these people, and would be there if they were having a holiday party—just saying. That should be our biggest worry!

Next to “Sandemonium,” her last nod to “mayhem and madness,” when she pushed her fans to RESIST, her current political chops reflect our mood, resignation, what we all feel. Her “This too shall pass” has become something else, soft, even when she extolls the virtues of her idol on the courts, Serena Williams. Oh well, what does it say that “Summertime Sadness” is one of her new songs?

“Didn’t get the joke! It’s a visual,” she lets out one of her good-natured sneers. And then cajoles her ample fans to drop everything and buy the merch.

The trademark Sandy themes emerge: Her daughter Cecily and partner Sarah become linguistic props for family satire as does the spirit of her deceased mother Jeanette. How bad could it have been growing up in Arizona? She channels Linda Ronstadt for “Different Drum.” Bernhard’s rendition could be her theme song– her career has been set to the beat of a different drum, never caving to commercial taste, bravely trailblazing her way through the precarious world of stand up comedy and personal memoir.

Her centerpiece is a hilarious “drug” saga, a typical evening at home nibbling edibles with her wife and their college age daughter, and watching “The Godfather” when sometime around the reveal of the horse’s head everything goes wrong, and our heroine freaks out in improbably ways. The story ends with a rendition of the Rolling Stones’ “She’s a Rainbow,” and what it took for Sarah, herself impaired, to stand by her in this time of psychic distress. It all comes back to “Love is the only act left.”

She’s a woman of our time and we love her. If you can get a ticket, she’s there through New Year’s Eve.