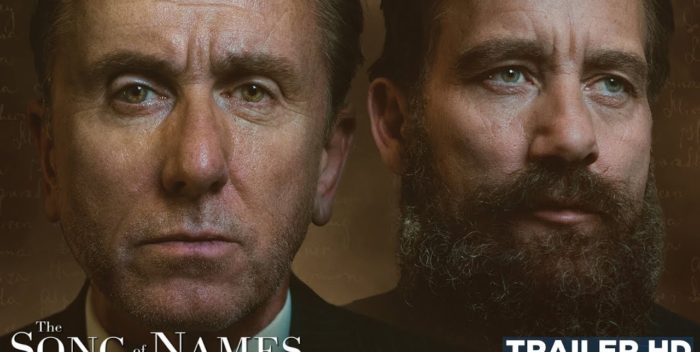 Overlooked in this awards season but a must see film of astonishing beauty and integrity: Francois Girard‘s “The Song of Names.” The stars are Clive Owen and Tim Roth in sensational appearances, with a gorgeous score by Oscar winner Howard Shore.

“The Song of Names” is an epic post-Holocaust drama of two men who grow up as brothers. The film defies clichés about the Jewish dead, in simply naming names: in this case, the murdered at Treblinka; miraculously, the Canadian filmmakers, producer Robert Lantos (Sunshine, Barney’s Version) and director Girard (The Red Violin, Thirty-two Short Films about Glenn Gould) were permitted to film there, a memorial site with an unforgettable field of boulders, each representing a town evacuated to this death camp.

Opening on Christmas Day, the movie, based on the novel by Norman Lebrecht, was a standout at the recent Hamptons International Film Festival, where I sat down with the filmmakers to talk about music, the Holocaust, and the stars Clive Owen and Tim Roth.

RW: The cantor intoning “Song of Names” alters the lives of the two central characters, Dovidl (Clive Owen) and Martin (Tim Roth). How did you create that powerful moment from a mere line in the book and script?

FG: The title scene is the center of gravity, the DNA of the whole story. In the film, Clive Owen as grownup Dovidl performs a song on violin after he hears a song in a synagogue. Until Howard Shore came on board there was no idea of how to do this. Howard Shore worked more on that two minutes of singing than anything else in the film. Musically, it is very simple; the work was digging out the truth of that singing. Howard’s wife, Elizabeth Cotnoir, is an expert in choral Jewish music. She and Howard brought the cantor from Central Synagogue to Budapest. The man never saw a camera before, just walked in and sang. We did nine takes and you hear four and seven. Dovidl then plays the song in Treblinka.

FG: I wrote them a long letter why they should say yes. The atrocity and engineering of murder! It was hard for me to go there; I went almost against my will. I found that memorial is a masterpiece: a kind of a celebration of the spirit. The first thing I see is hundreds of kids on a pilgrimage. 300 young Jews celebrating life. Our Polish actress’ boyfriend took us around but then we walked for two hours ourselves. This became our only real Holocaust contact. We are the first to shoot there. We spent half a day. Now I could cut a half hour documentary about Treblinka.

RL: I was struck by a ribbon that runs around the trees has the names of the killed. It’s an endless ribbon.

RW: How close to your own history does this film come?

RL: My history is not at Treblinka, but Auschwitz. The Hungarians came late to Auschwitz. My parents avoided it, but my aunt was there. My mother had Christian papers, fake ID. She never reported to the roundup. She was a swimming champion. Her coach and his wife had a daughter who had died years earlier. They made up fake papers during the German occupation, with their daughter’s name and my mother’s picture. They were not Jewish. They were evacuating the ghetto and she walked over and saw Jews being marched out in columns. My mother watched her sister being taken away to Auschwitz from the other side of the street. They saw each other but they didn’t wave. Both my mother and her sister survived; they had learned German in school and were fluent. My aunt had secretarial skills so the camp commander at Mauthausen made her his secretary so she could type in German. She went from there to Auschwitz where she got a job in the office, and was liberated by the Americans. My mother lived till 100, and left me 20 hours of audio tapes. I started to write about her.

RW: Did Francois’ background in opera make you want to work with him?

FG: Actually, I came to opera from film not the other way around.

RL: I wanted to work with Francois Girard. I did not want this film to be made by a Jew. He could discover this story from a more distant perspective from the outset.

FG: I never heard you say that.

RL: It’s the truth. Your first time in synagogue was when we went on Yom Kippur.

FG: That was my first time and we went to all the service together. I have many Jewish friends so I am not a stranger to those stories. In the book, Martin is Jewish but in the course of making the film we changed him to non-Jewish. Martin became me. It made my work more comfortable. It made my life easier. We were the outsiders looking into Jewish culture. Most of the audience for the film is with us. We opened the door wider for the film, with the same truth to the subject.

RL: I am surrounded by Jews: the writer is Jewish, screenwriter Jewish, Howard Shore Jewish, I am Jewish. It was essential that the central creative person not be Jewish. People don’t want to know about the horrors. The way to not repeat them is never to forget. Clive says to Tim, what is the greatest fear? That there is no one left to remember. Using music to tell this story gave me the chance to attract non-Jews.

FG: It has to move you whether you are Jewish or not. we are on the outskirts of the main theme, taking a walk with two characters on a volcano of six million dead.

RW: Speaking about your characters, tell me about casting Clive Owen and Tim Roth. I see Dovidl as catalyst, Martin as Everyman.

FG: Adult Dovidl shows up ¾ of the way into the film; if you are teasing an audience for an hour and half, you have to show someone, and Clive is the champion of charisma. I saw his play in NY. It was easy to get him. He saw the challenge and embraced the role. If you want Everyman, you need Tim Roth. His nervous energy. We discussed details with him. It’s all about Clive, but we are following Tim.

RL: Tim’s Martin is only liberated by the end of the film. After the betrayal when they were 20, finally at the end he is free when he, a non-Jew says the prayer for the dead for his brother. Otherwise he would still be searching.