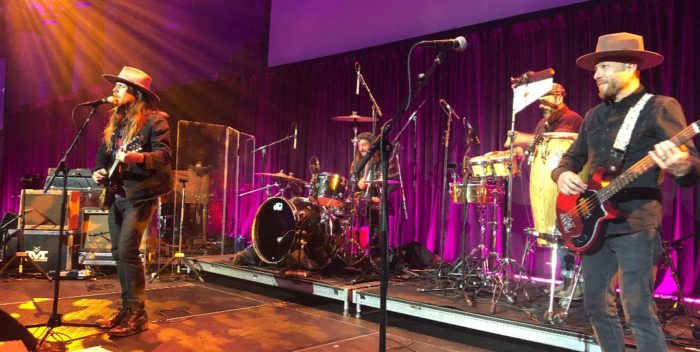 Here’s a case where the tail wags the dog. I went down to Cipriani Wall Street last night for one of the Samuel Waxman Foundation’s many successful cancer research fundraisers. They’re an outstanding organization, and they also like to have a musical act at their events.

Last night’s act was a little unusual, not a disco band or oldies act or beloved rock star from the 70s. This time it was Lukas Nelson and the Promise of the Real. Lukas is the 30 year old son of Willie Nelson who is in so much demand that he and the Promise back up Neil Young on the road. And when they don’t do that, Lukas is writing songs with Lady Gaga.

The Promise consists of Anthony LoGerfo. Tato Melgar, Corey McCormick, and Logan Metz. They are a ferociously talented band. I saw them play a year ago with Neil at Port Chester’s Capitol Theater and it has become a memorable night. I saw Lukas and brother Micah play with daddy Willie last February at the Grammys Producers & Engineers Wing tribute to Willie in L.A., and again, they were beyond top notch.

The group has a new album out in 2019 called “Turn off the News (Build a Garden)” on Concord Records that should have nominated for multiple Grammys. It should be on the top of the charts. If you like the Lumineers or Mumford & Sons or the Allman Brothers or Neil Young, this is your music. It’s country blues flavored rock, but it’s more than that. Like the Allmans, the Promise can flex in any direction. They carry not only a great drummer but also a percussionist. When they broke into Paul Simon’s “Diamonds on the Soles of Her Shoes” live last night, my jaw dropped. It was spectacular.

All the musicians are virtuosos, but Lukas — with his long brown hair and cowboy hat– is the star. He is a gifted guitarist who can make that thing sing. He’s a also damn fine singer. Sometimes he sounds like a young Willie Nelson, but he’s got other timbres in that throat that produce some colors even Willie never had. Lukas has a surprising R&B falsetto, too, that Don Henley would appreciate. I wouldn’t mind hearing him take on “One of these Nights” or “Take it to the Limit” just for fun.

The band played a number of songs from the album that I really loved including one– “Bad Case”– that should be a hit if radio still wanted them. Some other songs, like “Find Yourself” and “Georgia,” I wouldn’t mind hearing on here in New York on Q104.3. They could go back and rediscover a winner like “Set Me Down Like a Cloud.”

So yes, support the Samuel Waxman Foundation this end of the year. They are helping to find cures for cancer. And the music ain’t bad. You can sing along while you write the check.