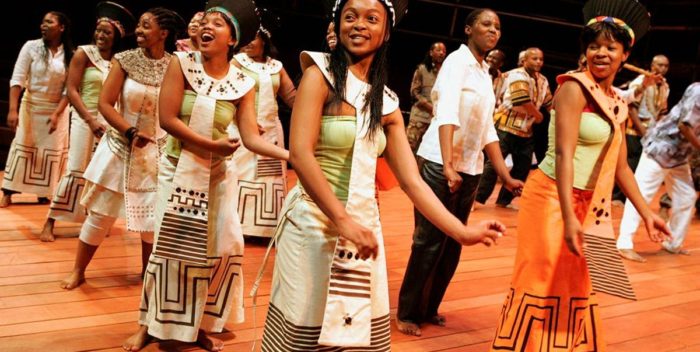 Stephen Daldry, known for directing such films as “Billy Elliot,” “The Hours,” and “The Reader,” and Netflix’s  “The Crown,” seems most proud of his twenty years of work with the Isango Ensemble from Capetown, South Africa.

The performers, from “one of the poorest places on earth,” said Daldry by way of introducing them at a fundraiser this week, have just finished one leg of a multi-city tour, a production of “Aesop’s Fables” at the New Victory Theater. So on Sunday, Daldry — preparing for the opening next week of “The Inheritance”  — the six hour already-raved about play he is now directing on Broadway — invited theater friends to meet them for a drink and have a little mini show at the Westin Hotel ballroom. The lucky few included a who’s who of the theater world: Tyne Daly, William Ivey Long, Martha Plimpton, Gina Gershon, Brenda Vaccaro, Israel Horovitz among them.

Daldry has been working with Isango for twenty years, as has his associate, director Mark Dornford-May, who said, after Apartheid ended, no one had a plan for blacks: “I went there to produce a play and fell in love. We want to ensure that young people know, you can be an artist and tell black stories the way they should be told.” “Aesop” is one of many works the ensemble performs. Their “Magic Flute” won an Olivier Award for Best Musical Revival. The crowd laughed, wondering what Mozart would think of that, as the voices threatened to break all glassware at the party.

The charming “Aesop’s Fables” stars a young man, Sithosethu Hintsho, in the title role as the slave who rises to freedom learning lessons from observing animals. Mark Dornford-May said, he’s been in the ensemble for 3 years, since he was 12. Before that, life was grim for him. His father had been shot; his mother died of AIDS. Now on a world tour with this stunning troupe, he is smiling bright, and it’s not just an act.

Tonight, Isango hits Boston, and next week Toronto. I have a feeling, though, we’ll be seeing them again in New York soon.