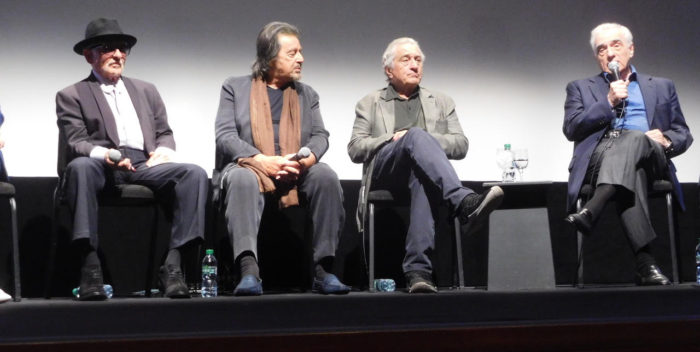 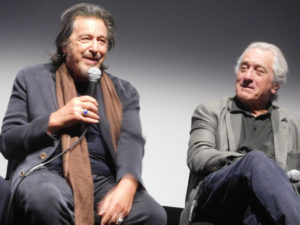 The mysterious disappearance and death of union leader Jimmy Hoffa is at the core of Martin Scorsese’s “The Irishman,” a riveting three and half hour masterwork in the canon of a great director. It’s as if “Goodfellas,” “Casino,” Gangs of New York” — all of Scorsese’s mob-related movies — culminate here in a Gotterdammerung. Which isn’t to say the (almost) 77 year old director won’t make more. But this is it, the capping moment.

It doesn’t matter that Hoffa has already been investigated before, even in a good film like Danny DeVito’s Jack Nicholson-starrer from 1992. Scorsese, his editor Thelma Schoonmaker, his crew, and his cast have transcended Hoffa’s story so that it’s something else, it’s theirs. You don’t need to know a thing about Hoffa. Thanks to Steve Zaillian’s extraordinarily architectural screenplay, a new Hoffa has been born that’s Scorsese’s invention. Did it happen? Who knows? It happened to these people the director has given us.

Zaillian has lined up the mob events of the late 50s and early 60s so that they run parallel to the election of John F. Kennedy and the prosecution of the mob by Bobby Kennedy. The suggestion is underscored by the idea that the mob– one time Kennedy pal Sam Giancana’s name is invoked — was somehow responsible  for JFK’s assassination as retribution for RFK’s attack on them after — they feel– mob money got JFK elected. This is not an Oliver Stone conspiracy movie. But since the point of view is from within the mob, and Hoffa’s story arc goes from mob hero to victim, the point is explored just enough.

One character lays it out after Kennedy is dead and Hoffa is in the cross hairs of his own former friends: “If they can whack a president. they can whack the president of a union.” At the Q&A after the screening today, Scorsese tried to downplay that. But the line jumps out of the screenplay. No one need say more.

Robert De Niro is the lead character, Frank Sheeran, the “Irishman” who became mobbed up with Hoffa and real life Sicilian Mafia chief Russell Bufalino, played with soulful precision by Joe Pesci. This isn’t Pesci’s wise cracking psychotic from “GoodFellas.” Bufalino was vicious. He ran his crime family for 30 years, from 1959 to 1989, after a long history in bootlegging and other, more serious crimes.

Sheeran starts out as a truck driver, then does small errands for Bufalino, finally becoming a hit man. The code for identifying hit men is the line “I hear you paint houses,” which was the title of Sheeran’s book with Charles Brandt and was going to be the title of this movie when I first reported it in 2010. De Niro didn’t like the change to “The Irishman,” and said at one point it would be changed back. Instead, there was some sort of compromise because two or three scenes in, the words “I Hear You Paint Houses” appears on screen in bold type. We don’t see “The Irishman” title card until the end.

De Niro’s Sheeran is one of the esteemed actor’s most compelling creatures. He’s alternately funny, dim-witted, and serious, an operatic character who Pavarotti could have sung. Yes, there’s de-aging special effects but there’s also incredible make up so he can stretch through all ages. All of it works, none of it is distracting. But as Sheeran’s participation in Hoffa’s rise and fall develops, and the gravity of his role unfolds, De Niro pulls off maybe his great acting coup of his later career. I wouldn’t be surprised if he won the Oscar for Best Actor. He is remarkable.

Part of De Niro’s magic comes from his many scenes with Hoffa, played by Al Pacino in what his also one of his greatest inventions. Pacino is spectacular, at every age, creating Hoffa for us. Sometimes we know Al can be hammy or over the top, which is why he’s satirized so often. But here he is sublime, controlled, restrained, and exacting. Scenes of these two actors (my favorites of all time) are historic. Zaillian’s given them such intimacy it’s like they’re Abbott and Costello (or Vladimir and Estragon from “Waiting for Godot”). In one scene, that I call for now “It’s what it is,” they are doing their own Beckett interpretation of “Who’s on First.” Pacino will be at the top of every list for Best Supporting Actor.

There are many supporting players who also deserve shout-outs including Harvey Keitel, Bobby Cannavale, Kathrne Narducci, Ray Romano, Jake Hoffman, Stephen Graham, Jessie Plemons, and, in a small role, Anna Paquin. Marin Ireland, as one of Sheeran’s daughters, isn’t listed in the imdb on the movie’s page or her own, but she has a scene that lights up the screen.

There’s also a lot of actors playing famous people of the time, like Don Rickles and Jerry Vale, and the use of real life clips of newscasters from the voice of John Johnson to the visages of Frank McGee, Roger Mudd, and so on. Scorsese throws in a lot of “easter eggs” including a movie theater in the background of one scene playing Don Siegel’s classic “The Shootist” (which starred John Wayne, Lauren Bacall, and Ron Howard). A formal description of that film is “A dying gunfighter spends his last days looking for a way to die with a minimum of pain and a maximum of dignity.” That sums up all of these guys– Sheeran, Bufalino, and Hoffa — but not Scorsese, whose career seems more revived now than ever.

A post script: this time around it’s not going to matter that the film came from Netflix. Unlike with “Roma” last year, no convincing is needed to get “The Irishman” a raft of Oscar noms (Picture, Director, Editing, etc) and even wins. This is it, this is the movie everyone asks for. “There are no good movies, what happened to movies?” This is what I hear all the time. Between this and “Once Upon a Time in Hollywood,” we’ve got them. So far, among the movies I’ve seen for this year, only these two and “Just Mercy” are in that category. They have to be appreciated regardless of distributor.