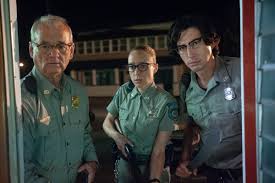 Jim Jarmsuch’s opening night film from Cannes, “The Dead Don’t Die,” landed in New York Monday night with a swank premiere at the Museum of Modern Art and a party at Kingside, on West 57th St. Everyone from the cast was there including Adam Driver, fresh off his Tony nomination Sunday night, on an off night from “Burn This” with Keri Russell.

In the movie, Steve Buscemi wears a red hat that says “Keep America White Again.” A farmer disdained by the sheriff of this small town, USA, Bill Murray, his house is adorned with rifles. Buscemi noted at the afterparty at Kingside, a diner where guests posed with zombies, that he often says his costumes help inform character, and this hat said it all. But Jarmusch goes one farther when you see Buscemi sitting on a diner stool next to Danny Glover; cue the casual way that in America a racist can sit side by side with a black person, converse, as if nothing is awry. The reveal is hilarious.

Continuing his fascination with the undead (vampires in “Only Lovers Left Alive,” now zombies) Jim Jarmusch’s “The Dead Don’t Die” is a hoot. At MoMA where guests included Ruth Wilson, Gina Gershon, Bob Gruen, Jarmusch’s high profile cast and crew, and many downtown denizens, the laughs came hard and fast.

Borrowing from “Night of the Living Dead” and other genre classics, Jarmusch– with his stable of actors including Bill Murray, Tom Waits, Ezster Balint, Adam Driver and others including Rosie Perez, Selena Gomez, Chloe Sevigny, Caleb Landry Jones — are all on a wicked playdate munching on each other’s flesh. But don’t miss the movie’s satire, perhaps completely over the heads of the French who dismissed it at Cannes.

Bill Murray’s sidekick is Adam Driver who keeps saying, “Things are not going to end well,” and, needless to say, they don’t. How is Driver so woke? Jim showed him the script, he told me. That’s how far this movie’s tongue is crammed into its proverbial cheek. Brilliant visuals include the undead frightful Carol Kane, a visually take from “Young Frankenstein,” Tilda Swinton wielding a samurai sword and driving a smart car, and a dynamic duo, Sara Driver and Iggy Pop, in a gruesome bit dining out, so to speak, at the diner.

So how do you direct an actor to be a zombie? Jim simply told actors, just find something broken in your self. Danny Glover said he copied what the others’ spastic movements. I thought Sara Driver evoked a character out of “Beetlejuice,” but she demurred, inspired instead by Blue Oyster Cult. Their big hit, you know, was “Don’t fear the reaper.”

“The Dead Don’t Die” is a nice hit for Focus Features, and a perfect early summer recommendation.