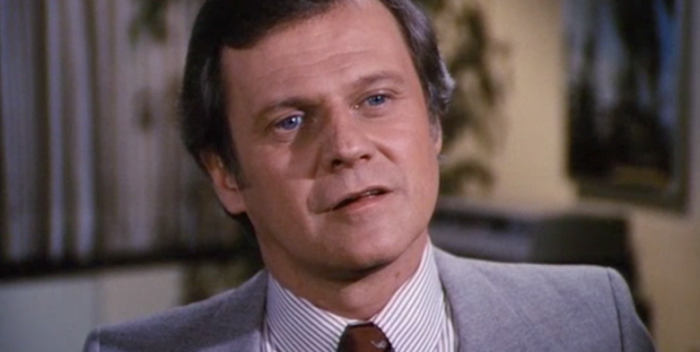 As any “Dallas” fan can tell you, Ken Kercheval’s Cliff Barnes was really always the star of the show. Sadly, reports come today that Kercheval has died at age 83. He was a fine actor who lasted the entire 14 seasons of the series. He got his start in early TV and on New York soap operas.

Cliff Barnes was the bane of JR Ewing’s existence. Cliff blamed JR for the death of his father, and for beating him out of countless oil deals. He was a ridiculous character on the surface, but Kercheval infused him with humor and just enough nuttiness that you had to root for him. You wanted Cliff to win so badly, and it was awful when JR would give him just enough rope to hang himself. All of Cliff’s women eventually slept with JR, too, and turned against Cliff, which was hilarious.

Kercheval really played a version of Wiley Coyote to Larry Hagman’s Road Runner. I hope they’re happy in heaven, smoking cigars and having a good laugh. Their TV relationship is recalled for me now in the one between Axe and Chuck Rhoades in “Billions,” who are carrying on their tradition.