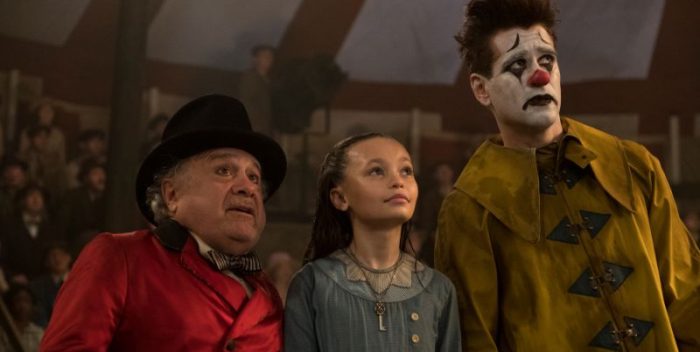 Seventy-six years ago, Disney released the animated classic “Dumbo,” which has been a mainstay for children and weepy adults alike.  Tim Burton’s live action remake misses the classic moniker in an elephant- sized way.

We all love our Dumbo, a newborn elephant who has oversized ears and is a laughing stock in the circus he and his Mom reside. Sweet Dumbo can fly, which leads to his mother being shackled and taken away. His quest is  to get back to her, helped by loving humans, follows.

I’m a huge Tim Burton fan, but here it feels like he either lost control or wasn’t given full rein over the narrative.  The script by Ehren Kruger is the main problem.   The story is disconnected, not seen through and confusing.  And you don’t feel invested in any of the characters except for the elephants.  Danny DeVito plays his stock character, the tough guy with a heart of gold, Medici the Circus Owner.  Colin Farrell is Holt Farrier, his former star and a Veteran who comes home physically disabled from war.  Farrell ably conveys his love for the kids and angst about what’s going on, but, but never is given a chance to flesh out Holt.  Eva Green, a Burton staple, is good as Colette and Alan Arkin is quippy as well as the mogul investor.

Surprisingly Michael Keaton doesn’t seem very invested as the evil capitalist, Vandermere.  The Farrier kids are not as appealing as one would wish in a Disney film, through no fault of their own. But the collective actor’s remoteness is again, a weak script and Burton’s direction. Visually the film has wonderful moments, besides the CGI elephants, the recreation of the infamous Dreamland is truly well done.  The park was based on the massive Coney Island amusement park that burned down in 1919.

But added up, “Dumbo’s” pluses are not enough to leave audiences with any heartfelt emotion or wonder.  Disney would be wise to donate some of the film’s profits to elephant groups fighting to keep them alive, given the current danger they are in.  To Burton’s credit, he does address the cruelty of circuses,  so bravo to him on that. As cute as the CGI Dumbo is, watch and love the real ones which will give you true joy and wonder.