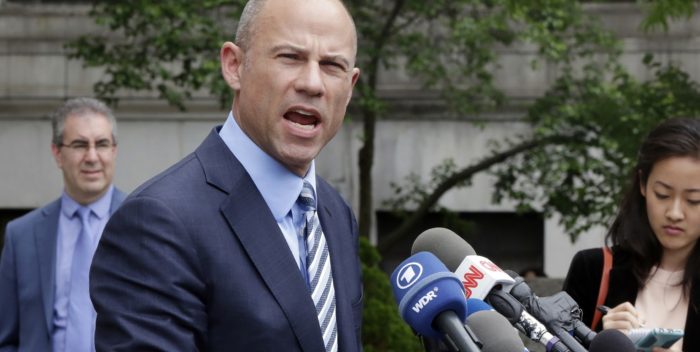 Michael Avenatti won’t give up and won’t quit until he’s exonerated. In a series of Tweets this morning he says he never attempted to extort Nike, and claims that players Bol Bol and DeAndre Ayton have taken large cash payments from Nike. Avenatti doesn’t really say he’s innocent and doesn’t address the Feds taping of his conversations or his double arrest in New York and California. “The public will learn the truth about Nike’s crime & coverup,” he declares.

“I want to thank all of my supporters for your kind words and support today. It means a lot to me. I am anxious for people to see what really happened. We never attempted to extort Nike & when the evidence is disclosed, the public will learn the truth about Nike’s crime & coverup.

“Contrary to Nike’s claims yesterday, they have NOT been cooperating with investigators for over a year. Unless you count lying in response to subpoenas and withholding documents as “cooperating.” They are trying to divert attention from their own crimes.

“Ask DeAndre Ayton and Nike about the cash payments to his mother and others. Nike’s attempt at diversion and cover-up will fail miserably once prosecutors realize they have been played by Nike and their lawyers at Boies. This reaches the highest levels of Nike.

“Bol Bol and his handlers also received large sums from Nike. The receipts are clear as day. A lot of people at Nike will have to account for their criminal conduct, starting with Carlton DeBose & moving higher up. The diversion charade they orchestrated against me will be exposed”

“The corruption at Nike was rampant with Merl Code and increased with his apprentice DeBose after Code left for Adiddas. Those above DeBose knew all about the payments. Nike conspired to route many of the payments through a convicted felon. Nike then lied to the government.”

“If Nike was cooperating with the government for over a year relating to this scandal (they weren’t – this is a lie), where are the disclosures in their SEC filings? There are none. What until the SEC begins their investigation & starts asking why Nike hid this info from investors”