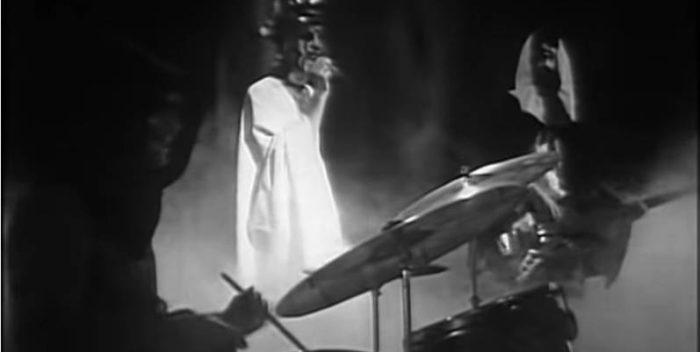 There’s a rock music footnote to the tragedy of the New Zealand mosque massacre which  claimed the lives of 50 innocent people last week.

The Australian-born white supremacist who carried out the murderous mission decided to live-stream his attack on Facebook. Despite Facebook taking down the original video – copies of it have spread like wildfire.  In just 24 hours Facebook took down over 1.5 million re-posts of the video.  And it is still proliferating like a virus all over the internet and dark web.

After he had completed his murder spree at the second mosque, the killer returned to his car and with his camera still rolling he played his specially-chosen anthem for his deeds – the 1968 song “Fire” – a pioneering psychedelic hard-rock record that was a worldwide hit for a British band called The Crazy World of Arthur Brown. The heart of the band was its composer/singer Arthur Brown. The disc was a #1 hit in his native UK and a Billboard #2 in the USA.  It didn’t hurt that the record was produced by Kit Lambert, the manager/producer of the Who and had Pete Townshend as Associate Producer.  At that time Arthur Brown was on Kit Lambert’s label Track Records. His label-mates were the Who, Jimi Hendrix and Thunderclap Newman (“Something In The Air”)

During live performances and in the legendary promotional film clip for the record, Brown performed the song wearing a fiercely burning helmet. A dangerous prop that led to stage fires at rock festivals and in TV studios.

Though Brown’s own musical career burned out within a couple of years – his aggressive musical style and flamboyant stage appearances (with much face paint, voodoo dancing and pyrotechnics) significantly influenced numerous artists who followed in his wake – including Alice Cooper, Iggy Pop, David Bowie, Peter Gabriel, George Clinton, Kiss, Judas Priest, Iron Maiden and Marilyn Manson. There were notable covers of the song by The Who, ELP, Ozzy Osbourne. The recording was sampled by artists such as Marilyn Manson and Prodigy.

Brown semi-retired from music, becoming at various times a life counseler, painter and carpenter. He still makes occasional returns to music – particularly in Europe where there is a circuit for rock artists of the 60s and 70s.  He just launched a small US tour – his first in 50 years.  This June he will be 77.
Spool forward to last Thursday night (Friday afternoon in New Zealand). Within minutes of news of the massacre hitting the media – reports appeared stating that the murderer had played Arthur Brown’s song ‘Fire’ as an anthem to his murder spree on his Facebook live-stream.  (The record starts off with a thunderous spoken introduction ‘I am the God of Hellfire – and I bring you FIRE!’)
Observing the news coverage in L.A. was producer Martin Lewis, a very old pal of the record’s associate producer Pete Townshend.  A protege of Beatles publicist Derek Taylor, Lewis is very media-savvy and he immediately surmised a potential danger to the reputation of the song and Arthur Brown.
“I thought of how Charles Manson mis-appropriated the Beatles songs ‘Helter Skelter’ and ‘Piggies’. The Beatles were galactically huge and it was easy for them to brush off Manson’s idiotic claim. But I thought that Arthur has just that one song that people recall and it’s his primary heritage. He needs to rapidly and strongly disavow this maniac’s abuse of his creation.”
Though Lewis didn’t know Brown (“we’d met fleetingly at a Kit Lambert party in the early 70s”) he was an admirer. He decided to track him down in the middle of the night and give him the heads-up of what had just happened.  By chance, Brown was not in his native Britain but in Austin, Texas where he was playing some low-key gigs as part of the SxSW Festival. Initially reached at midnight Central Time at their merchandise table after that night’s show, Brown and his manager/partner Claire Waller were totally stunned by the news – unable to comprehend the awful gravity of it.  Over the next 24 hours Lewis tried to guide them through the crisis by phone, text and email. Conveying the import of Brown issuing a statement denouncing the use of his song and giving them suggestions and guidance.
It took until 48 hours after the massacre, but finally Brown released a statement (see below).
Lewis offered the following thoughts about the situation:
“I think Arthur did remarkably well. He is a truly creative man. He defines that phrase ‘ahead-of-his-time’.  He never reaped the full rewards of being a pioneer of that style of music. That success fell to other artists.  But we must recall that it’s 50 years since he was at the center of the media vortex. To suddenly have your famous creation usurped and traduced into an anthem for a massacre by a vicious white supremacist was just paralyzing to Arthur. It took him time to process and respond. I give Arthur major props for navigating this crisis with such grace and dignity. His statement speaks volumes.
“Now we music fans have a role to play.  There was a famous moment in 1987 when U2 covered ‘Helter Skelter’ and Bono introduced it by saying ‘This is a song Charles Manson stole from The Beatles. Well we’re stealing it back.’  For all those of us who admire Arthur Brown, the many artists he influenced and the power of Arthur’s song ‘Fire’ – it is up to us to steal ‘Fire’ back from white supremacists – and restore it to its place in the pantheon of great rock songs. Don’t let ‘Fire’ become an anthem of hate. I suggest that contemporary artists should perform the song live as a show of support. And fans should express their views too. Hashtag: #ReclaimFire”

“As co-writer and performer of the song ‘Fire’, and creator of ‘The God of Hellfire’ persona, I would like to express my horror and sadness in the use of ‘Fire’, in an act of terror in New Zealand. My heart goes out to all the victims and families of victims of this atrocity – and to all the communities affected. I should like to say that I support no group or individual that uses terrorist tactics and killing as a means of dealing with other beliefs than their own.