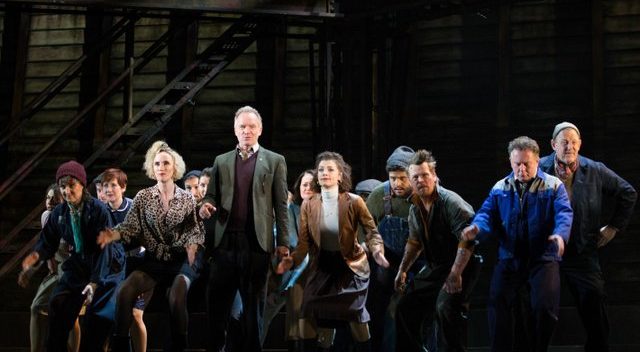 I got a chance to see Sting on Tuesday night in Toronto, where he’s wrapping up a sold out 7 week run of his Broadway musical, “The Last Ship.”

The show has been overhauled since its 2014-15 Broadway run. Sting and the new team took it to the UK, to Newcastle, where it’s set, and the audience ate it up. Next January, “The Last Ship” sails to Los Angeles.

At Toronto’s Princess of Wales Theater, “The Last Ship” looks even better than it did in New York. A new set looks like it cost millions, and fills the enormous stage gracefully.

There’s a new cast in Toronto, too, starting with Sting who’s playing the role of Jackie White, longtime foreman of the shipyard that’s in danger of being closed. Yes, the audience comes to see Sting, and they get their money’s worth. In the tweaked script, Jackie is very much a center of attention, and has a lot of singing to do. Sting is the star but also a vital part of the show’s ensemble. His unmistakable voice is a pleasure to hear, and his Jackie is a reliable moral center of a play filled with riveting characters.

The rest of the cast is more than able, with some surprises, too. I really liked Jackie Morrison as Peg, Jackie’s wife, whose new story arc grows and grows. By the end of the show when she leads the cast in “Show Some Respect,” Morrison has blossomed into being a key player. Oliver Savile, Sophie Reid, and Frances McNamee are also standouts. A lot of the actors are real “Geordies”– i.e. from Newcastle or its environs. One of them, Marc Akinfolarin, needs a New York agent fast and a couple of good roles down here. He’s the Keala Settle, so to speak, of this show. Watch out for him.

Sting has nothing to prove for his legacy as a rock star, songwriter, performer, actor, all of it. He’s written over a dozen really gorgeous, hummable songs for “The Last Ship,” and doesn’t shy away from revising the story or improving it. Like a great vessel, “The Last Ship” has great bones, and he’s committed to it. I’ll be curious to see how it develops next year on the West Coast. “The Last Ship” remains a little bit of a work in progress, with incredible potential for more runs. One day it will sail back to Broadway, a la “The Color Purple” or “Chicago,” with raves in waves.