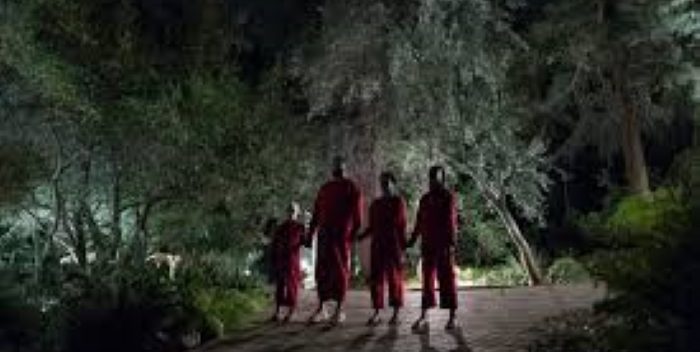 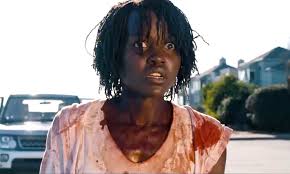 “Us” had its first all media screening in Los Angeles tonight and it was packed; they had to book a second theater at the Arclight in Hollywood. This will be happening in theaters all across the country this Friday when it is released and rightly so.  Jordan Peele wrote directed and produced this mixture of horror/mystery/suspense/ political humorous film.

This is a movie where your hands are covering your eyes at least some of the time.  Simply terrifying, yet the narrative connects the dots in an horror filled, suspenseful intriguing and clever way. Social commentary was the theme of his “Get Out,” and he brings the same sensibility to this film in a pitch perfect, precision like way.   The story starts with a beyond cute young girl named Adelaide who wanders off from her fighting parents at a boardwalk carnival in Santa Cruz CA.  She goes in to a house of mirrors and much to her horror, discovers a real girl who looks just like her.

Lupita Nyong’o plays the grown up woman who is still unnerved from the memory, as the audience soon is too. When her family, her loving and patient husband Gabe (Winston Duke) as her husband, her daughter Zora (Shadadi Wright Joseph) and son Jacob (Evan Alex) go back to Santa Cruz to their lake house and return to the same beach with a reluctant Adelaide. There they meet their friends, the Tylers (Elisabeth Moss and Tim Heidecker) along with their spoiled millennial kids.  They go home and that night Jacob tells his parents, “There’s a family in our driveway,” hands down that becomes a classic movie line. Looking out their front door in pitch-black darkness, they see the creepiest silhouettes ever.

From there the story, the clues, the mysteries, the subtexts of every line, the symbolism, for some obtuse for some crystal clear.  There is a ton to shift through.  What’s clear though is that there is the “Us” and there are the “Others.”

Nyong’o is simply terrific, she’s equally convincing and at ease playing the loving devoted Mom and the soulless opposite. The cast is her equal. Music plays a key role in the film and the score by Michael Abels is sensational (he also scored “Get Out’) and the songs, including Janelle Monae’s “ I Like That,” Minnie Riperton’s “Les Fleur,” the Beach Boys, “Good Vibrations,” all fit seamlessly.  Film geeks and the masses of people that will flock to see this will be debating and figuring out each and every scene.  Betcha this Halloween the “US” costumes will be everywhere. Peele hits a cinematic grand slam, his oh so unique take on the current state of this country works brilliantly in “US.”