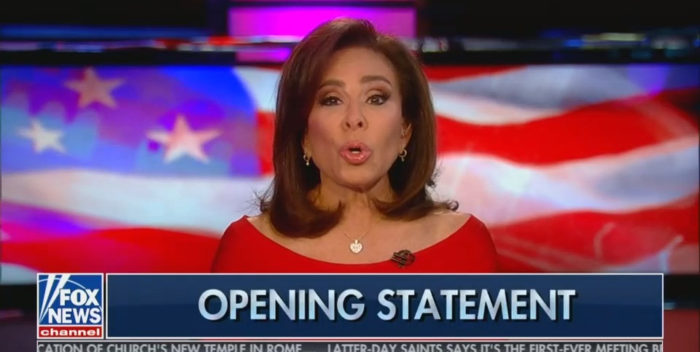 A P.S. ON TOP HERE: Pirro’s absence Saturday night also prevents her from plugging her paperback, “Liars, Leaks and Liberals.” It’s currently number 84,650 on amazon, and releases on Tuesday. The hardcover was briefly a bestseller last year. But things have changed. Let’s see how she does next week.

Fox News finally shows some sense. They’ve yanked Jeanine Pirro’s hideous show from tonight’s lineup and replaced with a rerun of another show.

The company seems to have done this to avoid starting a world war. This week. 49 people in New Zealand were murdered at a mosque by a crazy anti-Islamist.

Pirro is well known for her anti-Islamist rhetoric, and overall hate speech. Fox News can’t risk her going on live and mouthing off enough to incite trouble. For once, they’re on the ball.

Pirro does have an audience. Last week 2 million people watched her say crazy things off the top of her head. Pirro has continued to attack US Congresswoman Ilhan Omar from Minnesota. Her rhetoric this weekend could really spark violence no one needs or wants.