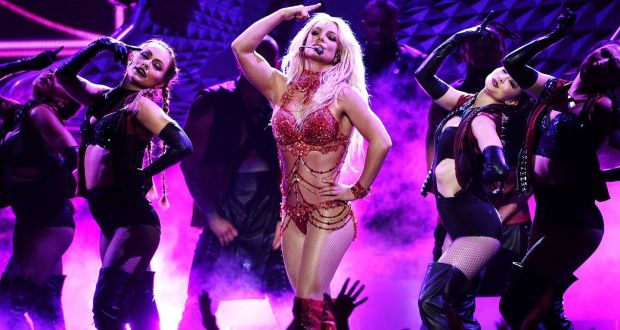 On the same day that Felicity Huffman was arrested– ah-rested–something else equally unthinkable has happened.

The songs sungs by (not written by, as she does not write) Britney Spears have been fashioned into a legit musical aimed at Broadway. “Once Upon a One More Time” will play in Chicago from the end of October through December 31st. And if there are people left who’ve survived the contamination, the show will be brought to Broadway…maybe for the Tony’s in 2020 but I have to think post- Tony’s for the summer of 2020.

And that’s not at all. The story involves Betty Friedan’s landmark book, “The Feminine Mystique,” a book that Spears can’t read or even listen to on audio.

From the press release:

Once Upon A Time… Cinderella, Snow White, and the other fairytale princesses gather for their book club, when – oh, baby baby! – a rogue fairy godmother drops The Feminine Mystique into their corseted laps, spurring a royal revelation. Could there really be more to life than bird-made dresses and true love’s kiss? Set to the songs of Britney Spears, the Princess of Pop herself, ONCE UPON A ONE MORE TIME is an uproarious, irreverent look at the towering challenges, charms, and choices involved in finding that most elusive of endings: Happily Ever After.

I’m waiting until you’ve grabbed your Digitalis and a stiff drink. Betty Friedan and Britney Spears in the same sentence. WTF?

For real: “I’m so excited to have a musical with my songs – especially one that takes place in such a magical world filled with characters that I grew up on, who I love and adore,” said Spears. “This is a dream come true for me!”

Betty Friedan, dead since 2006, said: “I’ve never been sorrier to not be alive so I could sue all the people involved. Horrified isn’t the half of it. Also, I was never a Britney fan, not after she broke Justin Timberlake’s heart. I’m more of a Katy Perry girl.”