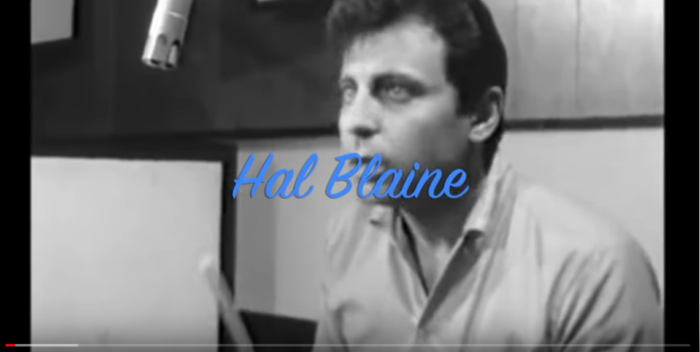 The amazing Hal Blaine died today in Los Angeles. He was 90. I was lucky to have met and talked to him over the years. He was the drummer for the Wrecking Crew, Phil Spector’s Wall of Sound, who put his beat on more top 40 hits than any other drummer in history. Everyone from the Beach Boys to the Ronettes to the Fifth Dimension, Sonny and Cher, and so on are in his debt.

Brian Wilson Tweeted: “I’m so sad, I don’t know what to say. Hal Blaine was such a great musician and friend that I can’t put it into words. Hal taught me a lot, and he had so much to do with our success – he was the greatest drummer ever. We also laughed an awful lot.”

Of course, his most famous moment is the tip off to “Be My Baby.”: It’s one of the most famous openings to any song, and defined Hal’s career. A second might be “Monday, Monday” by the Mamas and the Papas. Imagine a juke box just filled with songs Hal Blaine played on: nirvana.

Hal didn’t just do pop/rock. It’s his drums on Simon & Garfunkel’s “Bridge over Troubled Water” album. He’s what makes “The Boxer” so doleful and melancholy. He captured the light R&B of the Fifth Dimension in “Aquarius/Let the Sunshine In.” He made Neil Diamond’s “Cracklin’ Rosie” crackle.

Condolences to his daughter, Michelle, and all his friends and family. Hal Blaine was one of a kind.

Here’s a great documentary about Hal well worth watching: