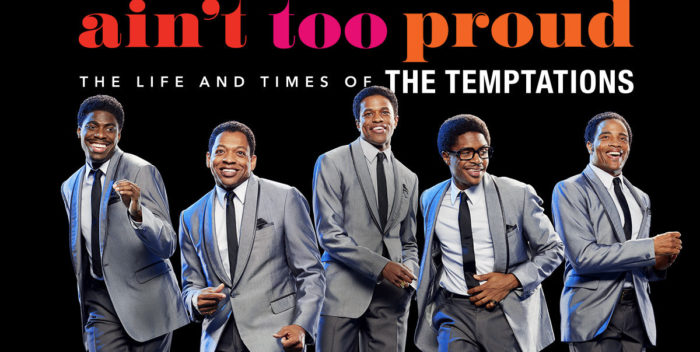 There was a line from the Imperial Theater last night straight down to the corner of 8th Avenue. The people were ticket holders coming to see the first Broadway performance of “Ain’t Too Proud to Beg.” a new musical about the Temptations.  Motown fans? Yes!

The musical doesn’t open until March 21st. But the producers are happy enough with their show (after runs in LA, Boston, and Chicago) to let people see it now. There had only been a short rehearsal schedule here  plus three days of recording the cast album.

I ran into Rosie O’Donnell during intermission, who loved the show but had to get home fast. “Sick kid!” she said. “I’ll see you opening night!” she said.

Every seat was taken. I think I even saw Christopher Knight aka “Peter Brady.”  The crowd roared at many numbers, and gave the cast of non-stars a standing ovation.

I can say I was very impressed for a first performance. Previews are for figuring out what works and what doesn’t. I give the show high marks for including my favorite Temptations song, “Since I Lost My Baby,” in a smart way to drive plot. (I’m going to humming all night.)

The sets, lighting, actors– dancers and singers, so talented– A plus. I really loved the guy who played bass baritone Melvin Franklin.

But I will say gently, they should omit use of a Harold Melvin and the Blue Notes song, “If You Don’t Know Me By Now.” It’s not Motown, it’s from Gamble and Huff’s Philly International label, literally Motown’s R&B enemy. It’s also from 1972 or 1973, all wrong. I say this in the nicest way.

There are so many songs from the Motown catalog and the Temps, you have a lot to choose from. When members of the Temps left the group, they had hits. David Ruffin had a monster hit with “Walk Away from Love” in 1975.  Eddie Kendricks had “Keep on Truckin.” It would be cool to hear those songs. Dennis Edwards had a monster also, “Don’t Look Any Further.” All Motown.

Also, one scene I’d love to see that wasn’t in the “Motown” musical– how Smokey Robinson wrote all those hits, and how we knew which ones went to the Temps or to his own Miracles. Maybe show how he taught the Temps “My Girl.”

Otherwise, “Ain’t Too Proud” has the feel of a hit. Much more I don’t want to say until the show is locked. But everyone’s in for a treat.