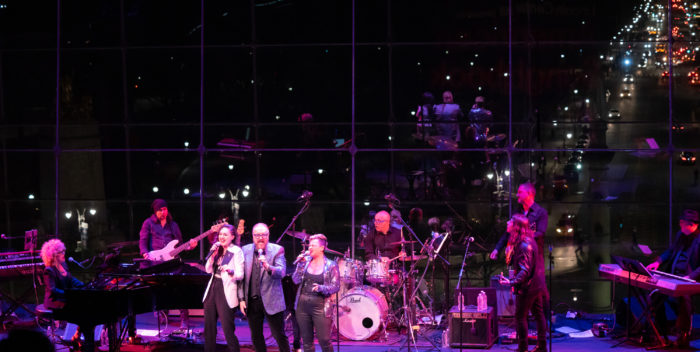 If you don’t know Desmond Child’s name, you should. He’s written a lot of the songs you love over the last 30 years.

Aerosmith, Bon Jovi, Ricky Martin? They owe a lot of their chart topping success to him. One of the best songs on Barbra Streisand’s most recent album is from Desmond.

So the songwriter who almost was a rock star– his early group was called Desmond Child & Rouge– sold out The Appel Room at Jazz at Lincoln Center on Saturday night. With the backgroup of the Manhattan skyline facing east from the Time Warner Center, Child brought a crack band that featured Tony winner Lena Hall plus Bette Sussman, Tabitha Fair and the best musicians in town. 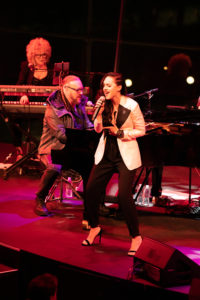 Even though some of these others sang, it was Desmond’s voice we wanted to hear. He is a rock star at heart, and his voice– which quavered a bit at the beginning– blossomed through the 90 minute show. He should, as they say, write a book. Stories about working with Cher, or KISS, or even Joan Jett are a hoot to hear and would even be better on paper.

There wasn’t a dud in the set last night. From “Livin’ on a Prayer” to an Aerosmith medley (“You Give Love a Bad Name,” “Dude Looks a Lady” and a sparkling “Angel”) to “You Want to Make a Memory” (a sleeper that someone should re-record now) to a previously unheard collaboration with Oscar nominee Diane Warren called “Truth Hurts” (someone has to make Gladys Knight sing this song), Desmond showed his incredible range and versatility.

What makes Desmond Child special and gives his best known works longevity is that so many of them are story songs. They are about people, specific characters, all of whom get stuck in your head like short stories. Sting, Billy Joel, Elton John, Carole King and especially Paul McCartney and Paul Simon have made this their forte. The listener has an emotional attachment to Gina and Tommy from “Living on a Prayer.” They’re like Roxanne, or Brenad and Eddie, or Eleanor Rigby. This just isn’t the case anymore in most contemporary pop-rock songs.

Let’s hope Desmond makes an album with this material. I need it for my car ASAP!