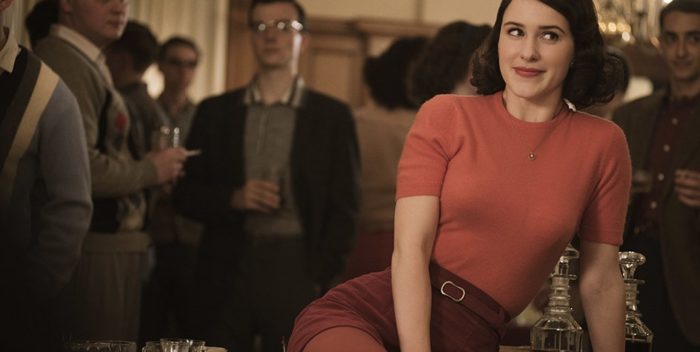 Right after Thanksgiving I had a chance to sit down with Rachel Brosnahan, the Golden Globe and Emmy Award winning star of Amazon Prime’s “The Marvelous Mrs. Maisel.” She is really as charming, funny, and fast as Midge– without the off color language, thank you. With big brown eyes and a stunning Irish-American complexion, Brosnahan makes it seem like she was born to play New York Jewish housewife Midge. (As Valerie Harper once said of Rhoda Morgenstern, the precursor to all this, “it’s acting.”)

Yes, it’s happened that fast. In the space of a year, Brosnahan–who plays Miriam “Midge” Weissman Maisel– and the show have made Amazon Prime into the location of the most talked about and beloved new show in what you might call TV-Like Land.

Last September, “Mrs. Maisel” won 8 Emmy Awards for its first season. Now, with season 2 a binge watching hit, they head to their second Golden Globes on January 6th. The show, Brosnahan, and co-star Alex Borstein are sure to win their awards for Best Comedy, Best Actress in a Comedy and Best Supporting Actress.

The show — sprung from the marvelous minds of Amy Sherman Palladino and Daniel Palladino– is one of those sterling hits that will march into TV history. Midge Maisel and Susie Myerson are the Mary and Rhoda of this generation. Tony Shalhoub’s Abe (Midge’s father) is their Lou Grant. When I mention that to Brosnahan at our meeting, she replies, “Alex says that all the time!”

The difference is that Borstein is 20 years older than Brosnahan. She’s been a comedy institution “Family Guy” for two decades. (Only now, people get to see her since “Family Guy” is animated.) Brosnahan is a literal overnight sensation after just one memorable role on the very not funny “House of Cards.”

SPOILERS AHEAD Season 2 goes from New York to Paris to the Catskills and then Midge must face the music. Her life as a divorced mother of 2 in 1959 is changing as she wins success as a female stand up comic. It’s been a secret, but in Episodes 6 and 7 it all comes pouring out. Zachary Levi makes a romantic bid for Midge, who’s still connected to her husband, Joel (Michael Zegers). Then there are the supporting characters, including Shalhoub, and Caroline Aaron as her scene stealing mother-in-law. (I’m also very fond of Mrs. Moscowitz, the bookkeeper in the Maisel garment factory.)

Everything about the time period is precise, right down to the undergarments.

You wear a girdle playing Midge?

It’s not a foot-in-back lace-up situation. It’s a modern corset, a leotard corset. It’s not to make me smaller, I have to clarify that. It’s just that our wardrobe person—the way her mind works—I’d like to jump inside and live in there for an afternoon– it’s all about the fashion. The clothes then had long waists, short tops. I’m more in the middle, like the 1940s. The corset is to make it work.

How long do you wear it?

About fifteen hours a day! I’m accidentally waist training, like a Kardashian, to be honest. My body looked a little funny at the end of the first season.

Did it go back to normal?

At the start, many people thought this was going to the Joan Rivers story. Or Phyllis Diller. But it’s not.

Jean Carroll was the first one I thought of before I knew anything about it. She started in 1955. I was able to find footage of her. She was a proper housewife with pearls…She was smart, she waited for the audience to catch up to her. She never held their hand. I studied her a lot, plus Joan Rivers, Phyllis Diller, Don Rickles, Lenny Bruce.

The pace of show is startling, like Aaron Sorkin only faster. (I snap my fingers, like, come on, hurry up)

And Amy does that sometimes, 5- 6-7- 8! I guess I’m kind of a fast talker naturally, I must be. I will hold on to this as a badge of honor, but once or twice Amy has told me to slow down! The pacing came more naturally than the comedy. The comedy is hard.

Have you ever done stand up comedy?

Would you ever do that?

Nooooooo. And I never would. Amy tried to get me to do it for 5 seconds when we were rehearing for the pilot, but gave up. I Said to her, My concern was I’m not a joke writer. I’m an actor. Amy writes brilliant material and I act it. That was a big concern. But also if it went badly, which it probably would, that I’d be so traumatized I couldn’t do the show. If you’re playing a doct0r on TV, you shouldn’t try and go perform surgery. It’s not a great idea! And you might kill someone!

Have you gone to see comics?

I went to more beginner-like clubs. And saw a lot of new comedians perform for the first time. I was more interested in how brand new comedians interacted with their audience. How they handled unexpected failures and successes. Watching different habits.

And can you imagine what it must have been like for female comedians in the late 50s?

No. Women were meant to be seen and not heard. Two stories about Joan Rivers stand out for me. One was she went on stage pregnant. It was headline making. That you shouldn’t be seen pregnant. And that she alluded to abortion. The consequences were hefty. That fact  that she minor-ly alluded to was a black mark. Those women were brave.

[Overlapping] A hundred! A hundred on the inside.

I know you’re making a movie now. What do you want to do?

I’d like to continue to be surprised. I was surprised to get this role to begin with. And House of Cards. To get the opportunity to stretch my muscles in ways I never thought they could be stretched.