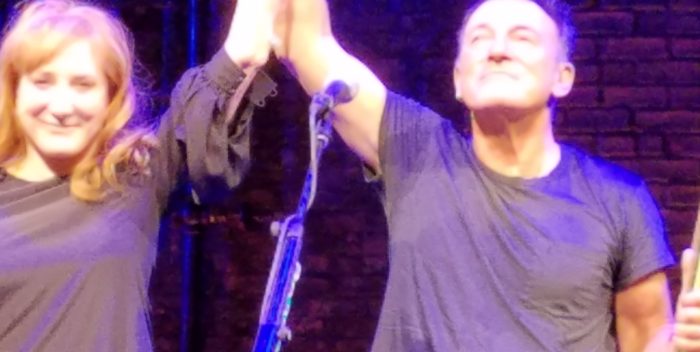 I went to see Bruce Springsteen’s Broadway show the night after it opened in October 2017. The show closes after making $113 million, this Saturday December 15th. On Friday, Sony/Columbia releases the CD. On Sunday the 16th, Netflix releases the video version to their service. It’s the same as the show I saw, so here’s my original review.

from October 2017: Bruce Springsteen is just like us and then again, not at all.

He’s like us: he struggles with his childhood, has father issues, and admits to stretching the truth at times. In this way, he is disarming as hell. That makes his Broadway show– for which people seem to have paid thousands of dollars– transcendent. And transplendent. And kind of magnificent. 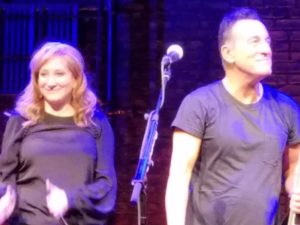 He’s not like us at all: he is a master showman, a gifted musician, a writer of fiction worthy of his own Nobel prize. Yes, you know all these songs he plays, reworks, re-imagines, and redefines during his two unbroken hours on stage. But now, without the E Street Band, a wall of sound and eighteen thousand people singing along, we are hearing the lyrics. And they are quite amazing. Bruce is a great writer.

Bruce is a fiction writer. How he disarms the audience is to admit that the experiences of his songs are not necessarily his– they are made up, projected, cooked and digested from observations. His hometown? “I live [a couple of miles] from my hometown,” he admits. All the cars from songs like “Racing in the Street” or “Born to Run”? At least at the time he wrote them he did not drive, he had not driven a block. He didn’t have a drivers license the first he and his band drove across the country.

He does admit at the start of the show in one his many monologues– “I have never held a job.” But of course, he has: he’s the last of the great poets. I remember when Bruce first came on the scene with “Greetings from Asbury Park,” he was maybe the new or next Dylan. People didn’t like that. There were a few maybe new Dylans in the mid 70s before “Blood on the Tracks” re-established the Master. And people were wary of Springsteen. Then came “Born to Run.” And the rest was chaos.

Now, with a stage book that’s very shaped and the songs stripped down and devoid of their popular ornamentation, you can see Springsteen was the next Dylan. He was also the next Springsteen. Unlike Dylan, he had nothing really to rebel against. He came from the singer songwriter era. But he had echoes of R&B, and a joyful looseness that James Taylor and Jackson Browne lacked. Bruce was rarely somber. He was telling stories. Or as he says in this show, he was tell us his story and our story. (His story includes wife Patti Scialfa, who has two lovely duets with the father of her children. She’s value added on this ticket.)

Sometimes he is somber. A highlight of this show is “The Rising,” written about 9-11. His face is different when he sings it. That’s when he transcends a night with a rocker on Broadway. Equally moving is “Land of Hope and Dreams,” toward the end, segued into from the rousing “Dancing in the Dark.” Because you see, like Steven Spielberg who admitted to being a patriot in his documentary, Springsteen is one, too. That’s always his bigger picture.

Oh yes: “Born in the USA” is quite brilliantly a blues number. And Bruce does talk about the “mess” we’re in now. But he touches lightly enough on politics. And the ticket prices? I asked around. If you told everyone they could stay and see the show again right away for $500, I think most would have remained.