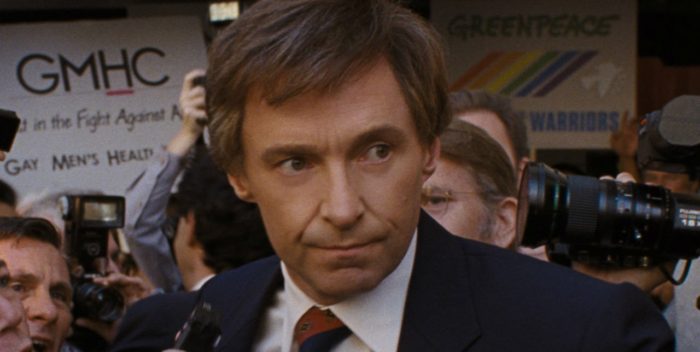 The movie that might have resurrected the reputation of Colorado Senator Gary Hart is a bust at the box office. Launched on Election Day– November 6– “The Front Runner” is pretty much in last place at the box office. Even with Hugh Jackman’s charismatic performance, the movie has made just $700,000 after 19 days in release.

UPDATE: The total as of Sunday night will be just over $1 million.

Senator Gary Hart of Colorado was once the great hope of the Democratic party. He was hip and young and on the right side of causes. Hollywood loved him. And in the Reagan era Gary Hart was top of the list of Democratic hopefuls.

But Hart’s political life came to an end in late 1987 when an affair with Donna Rice became public. The affair became public after Hart was photographed on a yacht called the Monkey Business. She was sitting on his lap. Endless rumors about his womanizing became true, and Hart would not be part of the 1988 election.

It would be four more years before Bill Clinton would become the Democratic champion. And even though philandering was on his resume, Hart had already blazed that trail.

“The Front Runner” is directed by Jason Reitman, whose credits include the excellent films “Up in the Air” and “Juno.” There’s nothing wrong with this film. But Sony Pictures cannot make people come see a movie in which we know the ending, and it still can’t be explained in a logical way. How could Hart have compartmentalized his life in such a way that personal and public wouldn’t collide? And why did his wife, Lee, stay with him?

After all the these years, and having seen “The Front Runner,” we still don’t know the answer. Sony increased the number of theaters this weekend, hoping that Jackman– best known as Wolverine and now a friend of Ivanka Trump and Jared Kushner– would bring in fans. But Gary Hart is now X Man. He’s just an ex-politician who flamed out. Whatever the movie cost– $30 million?– is pretty much lost.