What seemed like a lot of legal slam dunks against movie mogul Harvey Weinstein are falling apart in every direction. Weinstein’s many accusers (80? 90?) who are not even involved in the current criminal case must be wondering what the heck is going on. Just how many surprises exist down the road?

On Friday, NYPD SVU chief Michael Osgood was replaced after working on Weinstein’s cases from the start. The NYPD has basically been in chaos since the Weinstein revelations began a year ago. This follows Detective Nicholas DiGaudio’s revelation that he advised a witness to erase emails from her phone, which was going to be used as evidence in Count Six against Weinstein. Now that count as been dismissed.

Now it seems also French actress Lea Seydoux changed her story about her encounter with Weinstein to Marie Claire magazine in the French edition.

In the Guardian, in October 2017, Seydoux claimed Weinstein tried, aggressively, to attack her– twice, that she had to push him away.

I found myself in a situation where If he wanted to rape me, he could have done, but he didn’t. I did not want a physical fight, I didn’t want to struggle. Given his weight, he could have pressed me against a wall, forced me, he did not do it.

‘It never came to blows and I didn’t have to defend myself or resist. Given his weight, he would have been able to pin me against a wall and force me to do something, but he didn’t.’

QUESTION: What was your relationship to him?

I knew him quite well, I felt tenderness towards him. But he scared me. When I saw him, I had cold sweats, I said to myself, ‘Well, I’ll have to be kind to him, and at the same time push him away, very gently.’ It was balancing act.

Then there’s the case of Ambra Battilana, Weinstein’s Italian accuser from 2015 whose story had made the front page of the Post and NY Daily News. When Battilana made her accusations against Weinstein in 2015, Cy Vance declined to prosecute the movie producer. When the whole Weinstein scandal broke a year ago, Battilana was interviewed by Ronan Farrow for The New Yorker in a story called “Harvey Weinstein’s Secret Settlements.” Battilana told Farrow in his New Yorker story that she signed a non disclosure agreement with Weinstein but didn’t understand it and didn’t know what she was signing.

Farrow, however, omitted something important. Battilana had a lawyer in New York advising her at the signing. She also had a French lawyer on the phone translating for her. Battilana knew exactly what she was she signing.

She told Farrow: “I didn’t even understand almost what I was doing with all those papers…I was really disoriented. My English was very bad. All of the words in that agreement were super difficult to understand. I guess even now I can’t really comprehend everything.”

Battilana, however, had a battalion of legal help. According to Weinstein’s motion to dismiss she had two lawyers, one of whom was Italian and translated for her. I wondered about this. Who was advising Battilana and why was that left out of the stories? It turns there were two lawyers– one here in New York named David Godowsky, who actually advertises his representation of Battilana on his website. Battilana had another attorney in Italy, Patrizia Bugnano, who worked for days translating the agreement with her. Another Italian lawyer, Filomena Cusano, representing Weinstein, vouched for having contact with Bugnano. I contacted Bugnano by email who would only say:

“I am not involved in meeto
movement
and since three years I don’ t
hear more Ambra
I am sorry”
But here are the letters they signed in 2015: 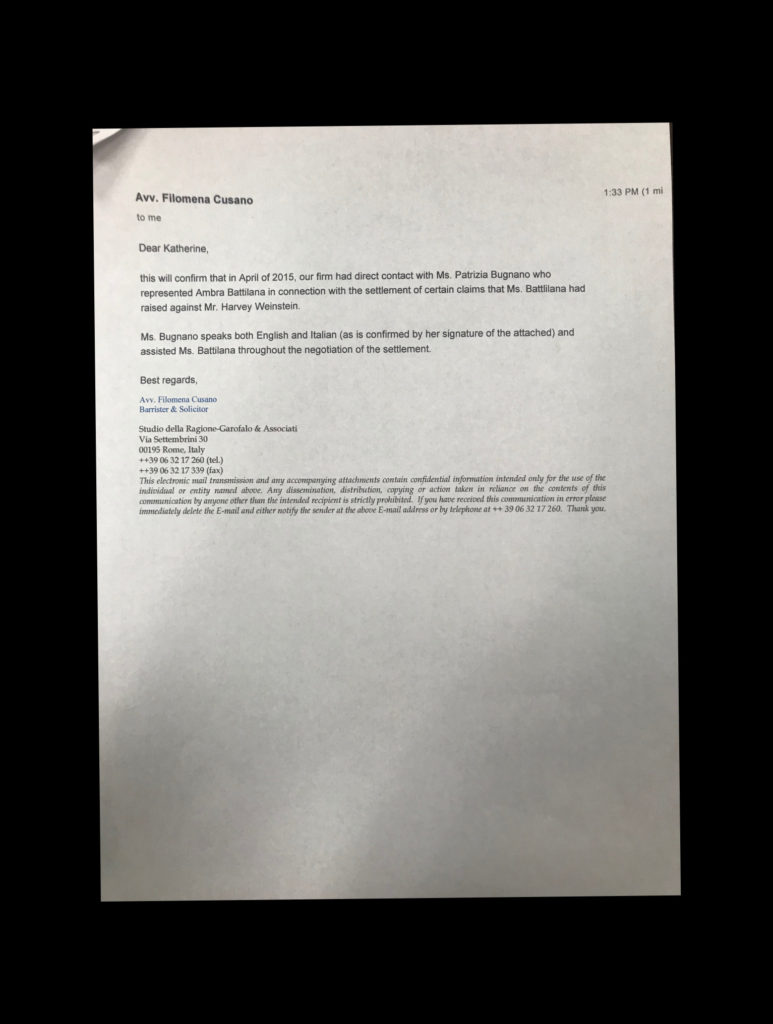 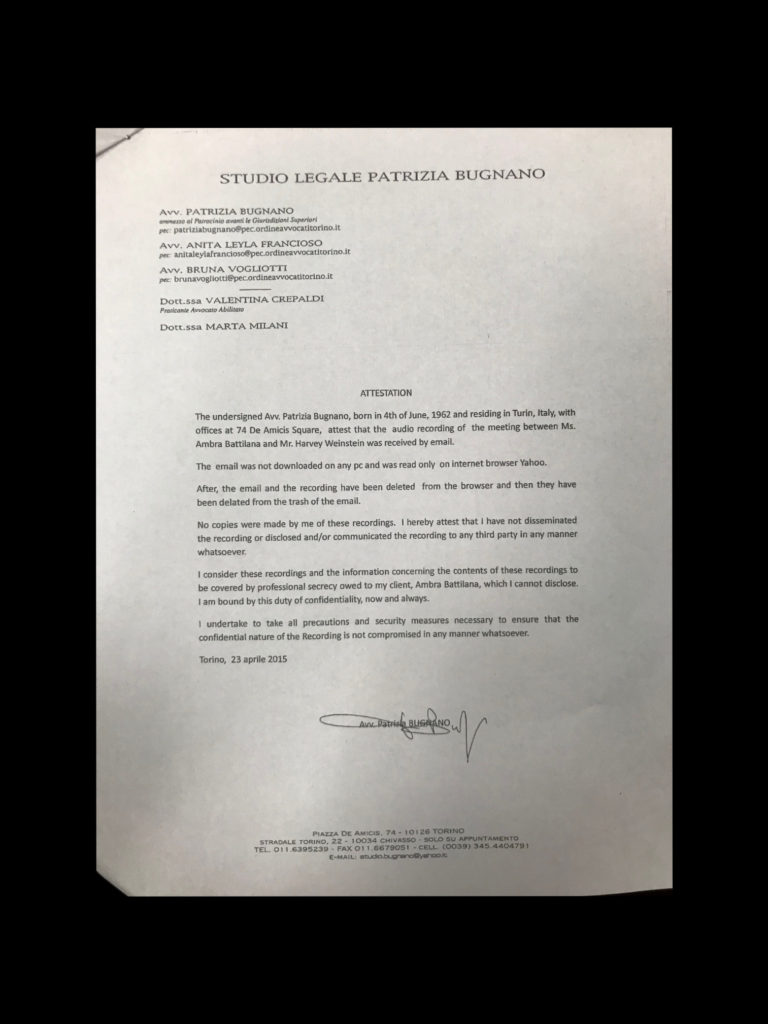 So discrepancies abound in the Weinstein case, with questions about how much The New Yorker left out of their original stories. This doesn’t do much to bolster the confidence of Weinstein’s accusers, who counted on the police and the State’s Attorney’s office to defend them in a competent way.