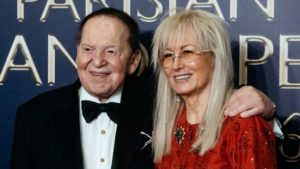 The Presidential Medal of Freedom is about to be seriously devalued.

Over 60 years in the history of the prize, it has gone to a wide variety of people: scientists, philosophers, philanthropists, cultural stars, military heroes, great statesman and so on. It has never gone to a major political donor. Until now.

Check the list on Wikipedia. Only one person will now be listed as a political donor. That’s Miriam Adelson, wife of casino billion Sheldon Adelson, who shovels millions into the Republican party every year. And I mean millions: $113 million to Republican party candidates, PACS, and committes in 2016.

That is all the Adelsons are good for: backing right wing causes. They do nothing for humanity. They are simply there for Donald Trump. And now they’re getting paid back.

Today’s Presidential Medal of Freedom is a joke. But what did we expect? Here’s an excellent evaluation of Adelson from the New Yorker.

By the way, just to make it interesting, the Adelsons have a number of interlocking and overlapping registered family foundations that funnel money back and forth among each other. From what I can tell they mostly benefit Israeli causes and institutions in the neighborhood of over $100 million. The Adelsons should certainly be receiving the Israeli Medal of Freedom.