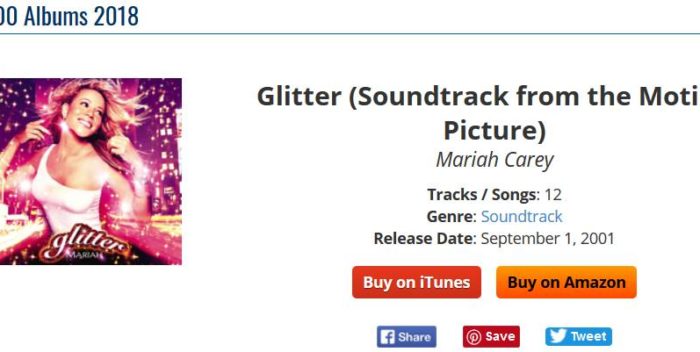 On the eve of Mariah Carey releasing a new album called “Caution” comes a head scratcher.

Her 2001 album “Glitter,” huge flop back in the day, sits at number 1 on iTunes tonight.

Why? Who knows? It’s priced to sell at $4.99. But still– what the f? Where are the sales coming from? Is it a programmed computer? Is it one person in a basement just hitting the BUY Button over and over?

Maybe Mariah’s including “Glitter” in concert ticket bundles. But even that’s weird since usually you’dbe doing that with the new album. Plus “Glitter” doesn’t really exist anymore except on iTunes. Amazon also sells it digitally. But Spotify doesn’t even have it.

“Glitter” had no hits in 2001 and sank like a stone. The movie it was attached to was a famous disaster. Maybe someone at iTunes can explain its new success on Thursday. Something is gaming the system.