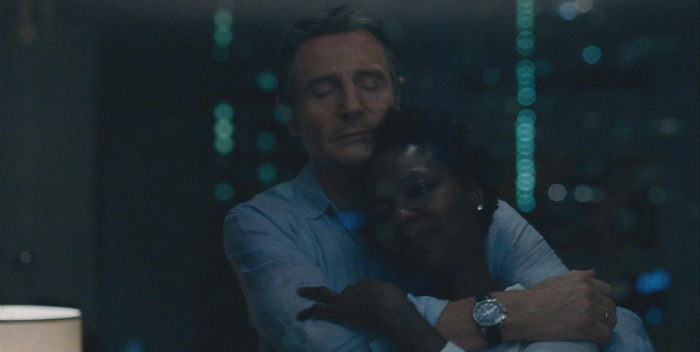 Viola Davis and Liam Neeson have a red hot sex scene in the opening scene of “Widows”; they are in bed and kiss passionately, slowly and with lots of tongue. The scene feels fresh and even revolutionary.

Directed by Steve McQueen’s (“12 Years a Slave”), who co-wrote the script with Gilian Flynn (Gone Girl), “Widows” is a thriller about four women brought together after their husbands are killed in a heist gone wrong, and the wives are stuck with settling their debt.

McQueen, Flynn, Elizabeth Debicki, Cynthia Erivo and Davis, turned up after an exclusive screening over the weekend to discuss the film.

Davis — who is so good she could move audiences to tears reading the IHOP menu — talked about why she signed up for the part of Veronica, the ringleader of the heist and the wife of Neeson’s character:

“Every time you read a script, you want the women to be familiar. It’s like the horror films where you always, always see the woman running from the monster or running from the demon, and she always sprains her ankle. I am serious. Why do you always sprain your ankle? Why do you have door made of glass and you don’t lock the door?” she asked. “What Gillian did with this, and Steve absolutely did beautifully, is they answered the question very realistically on how are these women going to pick up their lives after the loss of their husbands, their loved ones, and their financial source? Who is going to take care of my kids? How will I go live again? How am I going to pay my rent? How am I going to do anything when no one has taught me how to do anything? What it gives the audience is a sense of feeling less alone, of looking at images of womanhood that is realistic, as opposed to not realistic. That’s what I always look for in a character,” said the actress.

As for that revolutionary sex scene, Davis said she’s never seen one like that before on screen. “Listen, I’ve gone through the lexicon in my mind, and yeah. I need to do my research, but really I couldn’t find it.”

“My husband isn’t here today,” she laughed, before discussing the film’s opening scene. “I always feel that the things that are the most revolutionary are the things that are the most current,” she said. “I think by the time we catch up with the times, we’re 50 years ahead of the time. We didn’t start doing plays about AIDS until the late ’90s, and AIDS was around in the ’80s. It takes us time to process. Change doesn’t happen without chaos and anxiety. In my brain, I’m always wondering why an industry that is so committed to inclusivity and diversity, they’ve never done that.”

“I’ll tell you the most revolutionary thing you could do. If there is a role out there that Sandra Bullock — I’m just naming some names out there — Sandra Bullock or Charlize Theron or Nichole Kidman is being considered for, why can’t you consider a woman of color, why can’t you? When I say why can’t you, I don’t mean just put my hand on my hip and say, ‘Why can’t you, motherfuckers?’ I’m actually asking the question why, and I want you to answer me, and I’ll tell you why. I’m just going to say that. When you see that opening shot, Harry is not beating me. There is no other reason for that scene other than to show two people in love. For you to embrace that, you would have to embrace all the questions that come with that. He saw me, maybe in the airport, and said, ‘I want that woman.’ They had a conversation. They intellectually and sexually bonded. They had sex. They fell in love,” Davis said. “All those reasons why you would cast a Nicole Kidman or Sandra Bullock or a Charlize Theron is the same reason why you cast me, because I am just as much a woman as they are. I’m not just a walking social statement. That’s why you have the scene, is because of that.”