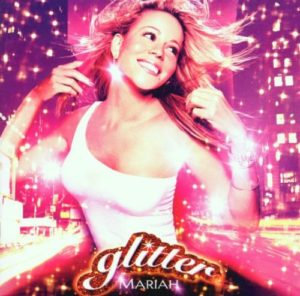 On Thursday night we get a new Mariah Carey album called “Caution.” We’ve already heard four singles, the rest is nigh as they say.

But wait– for some reason, Mariah is already back on the charts, and not just with her Christmas album. On iTunes, Mariah’s 2001 album, “Glitter,” a notorious flop 17 years ago, is at number 8. And on amazon.com’s digital music chart, it’s number 127.

This is a pre-Christmas miracle for Mariah. “Glitter” was the soundtrack to a movie she starred in that was so bad I still remember laughing out loud several times during the screening. It was a bomb. Mariah was killed for her acting. She got the last laugh, though, when she appeared in Lee Daniels’ “Precious” as a social worker and won raves.

On the music side, the “Glitter” project was such a disaster that EMI Virgin let her go and paid out her $50 million contract. Mariah went to Def Jam consequently and had her monster hit “The Emancipation of Mimi.” She’s like a phoenix, always rising, with decolletage.

It was during this time that Mariah also had a bad time emotionally, blaming Tommy Mottola, her ex, and head of her label, for stealing music she was working on and giving it to Jennifer Lopez. This was later confirmed.

So why is “Glitter” back? Fans on Twitter say they’ve been buying it as they’ve jointly reviewed her old albums. Mariah Tweeted that she’s happy there’s finally #JusticeforGlitter.

It does help that the price is only $4.99. BuzzAngle says it recorded sales of 259 from Friday through Monday night.

Not sure what's happening but I love it! The lambily is amazing at getting #JusticeForGlitter 💕✨ https://t.co/VYt2OsEXze