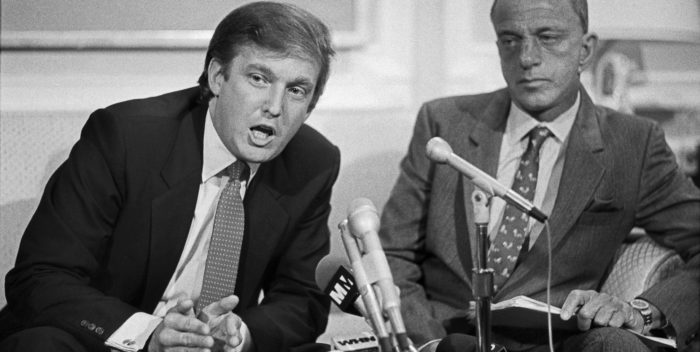 Let’s say Ivy Meeropol is an Angel in America. The granddaughter convicted spies Julius and Ethel Rosenberg is making an HBO documentary about the man who sent her grandparents to their execution: the very evil Roy Cohen.

Previously, Ivy made an incredible doc about the Rosenbergs called “Heir to an Execution.” She also directed “Indian Point.”

Cohn was the lawyer for the House UnAmerican Activities Committee in the 1950s, lackey of Senator Joseph McCarthy and then Vice President Richard Nixon. He destroyed hundreds, if not thousands, of lives painting people as Communists and then blacklisting them– or worse.

In the case of the Rosenbergs, Cohn oversaw their railroaded prosecution for being Russian spies, and path to the electric chair. “Heir to an Execution” is a must see film. And now so too will this untitled film be as well.

Cohn went on to become Donald Trump’s self-proclaimed mentor. They had a metaphoric passing of the flaming pitchfork.

Meeropol is basing her film on discovered taped interviews between journalist Peter Manso and Cohn, a cesspool of a human being, at the height of his power-brokering in New York in the late 70s and early 80s. Cohn’s decline and death from AIDS were chronicled in Tony Kushner’s Pulitzer Prize winning play, “Angels in America.” Kushner, and actor Nathan Lane, who played Cohn, are interviewed in the movie.

Cohn, charred to a crisp in hell these days, was also the best friend of Barbara Walters, who is now in total retirement and off the social circuit. It will be interesting to see if she turns up in this film. Walters once told me it was Cohn who helped her adopt her daughter Jacqueline. Cohn was gay, and Walters acted as his “beard” for many years.

Ivy Meeropol says in a press release: “The time has come for audiences to understand a man who, while hiding so much of himself from the world, has had a profound influence on our society, even to this day. We are thrilled to partner with HBO Documentary Films to bring this remarkable story to life.”

Just to clear this up: Ivy is the daughter of Julius and Ethel’s son Michael, who was adopted by people named Meeropol after their parents were unjustly killed by Cohn and the US government. The Rosenbergs had another son, David, and Ivy has a brother.

You might want to read E.L. Doctorow’s excellent novel, “The Book of Daniel,” which dramatized their story.