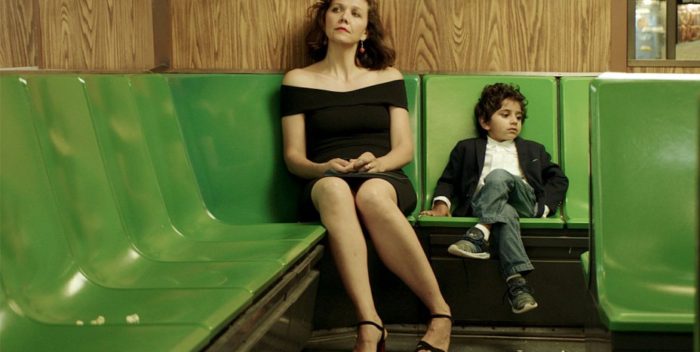 Jake Gyllenhaal, hosting a special screening of his sister Maggie Gyllenhaal’s new film, “The Kindergarten Teacher,” at Metrograph, was all praise for his sibling. (The movie is in theaters, and on Netflix right now.)

“I’ve been watching her act all my life,” he smiled broadly at a crowd that included Christopher Lloyd, Israel Horowitz, Diane Sawyer, and many others including his “Wildlife” director Paul Dano and co-writer Zoe Kazan.

The titular kindergarten teacher joins a roster of edgy women brought to life by Gyllenhaal’s ample talents. Think “Secretary” where her character enjoys a good spanking. In this movie, she’s a thwarted poet who recognizes the poetic gifts of one of her students, a five-year old named Jimmy Roy played by one of the producer’s children’s real life classmates, Parker Sevak. Wishing to nurture his verse, Gyllenhaal’s Lisa goes creepy, unacceptable. Every parent will get the willies watching her become more and more obsessed with savant poet Jimmy. She even tries to pass off the little kid’s potent verse as her own to gain the graces of her own hottie poetry teacher, played by Gael Garcia Bernal.

At a post screening Q&A, Ashley Banfield began by asking which is more fun to play, a prostitute (as in HBO’s “The Deuce”) or a kindergarten teacher. A prostitute, said Gyllenhaal gamely, and yet she spoke eloquently about women like Lisa whose imaginations are curbed by few opportunities and her own artistic limitations. Lisa illustrates the consequences of what happens when you starve a vibrant woman’s mind: “Women twist themselves into a culture that doesn’t care who we are. We are learning right now in our culture how little women’s experiences are heard or valued. People are hungry for something truthful.” As to her own ambitions, Maggie Gyllenhaal is adapting a novel by Elena Ferrante to direct.