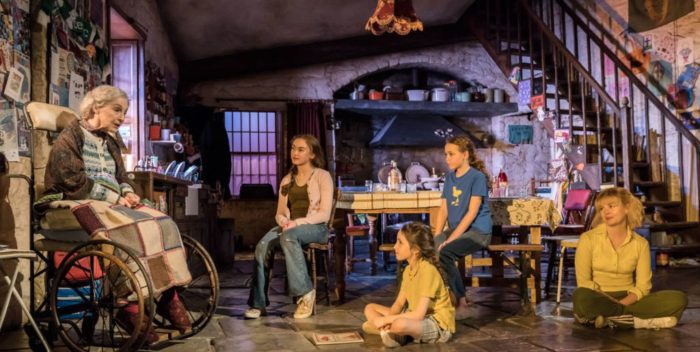 In Northern Ireland in 1981 The Troubles pit Irish against Irish, resulting in a great deal of anguished, epic drama. Think Martin McDonagh, and the movies of Ken Loach. In Jez Butterworth’s “The Ferryman,” at the Bernard B. Jacobs Theater on Broadway, a monumental three hours and 15 minutes zip by, beginning with the news: the body of Seamus Carney, a ten-years missing man, turned up in a bog, hands and feet bound.

Nearby his wife/widow holds the fort, living in her brother-in-law Quinn Carney’s lively household with her son, now a teen. To celebrate the harvest they are cooking goose, and just as the family learns the news about the recovered body, the once live bird– he appears on stage before his untimely death– hangs on a hook at the kitchen window, bound, emblematic of Seamus’ remains, best left to the imagination.

The running story was that Seamus had vanished, gone to Liverpool. Maybe. But Caitlin (a fine Laura Donnelly) his wife knows better; the IRA has killed him, and the family is under threat to be quiet about it by the local thug in charge..

“The Ferryman, like the plays of O’Neill, is replete with classical references to Virgil, who’s even invoked at one point if you don’t get it. As Penelope did in Virgil’s epic poem, she hangs out waiting for news, or a body, enjoying the raucous family life and attentions of her brother-in-law Quinn Carney (brilliant Paddy Considine in his Broadway debut) with whom she’s fallen in love despite his hypochondriac wife and seven children.  The references include the titular “ferryman,” cited in a reading of The Aeneid, who cannot bring the dead from life’s shore over the river Styx unless the body is buried– and in this case, until we meet the Carneys, Seamus has been in absentia for a decade.

After a recent performance we ran into the great Irish actress Fionnula Flanagan (“The Others,” “LOST”) who plays Aunt Maggie. Far off in her own reverie, Maggie is seated onstage in a wheelchair. She’s a teller of tales, and the play’s oracle, mystically far away as her name suggests. Flanagan noted that Sam Mendes’ direction was meticulous, his eye on every detail and movement of a cast of 22, the chaos and exuberance of family life cleverly orchestrated including dancing and singing. Flanagan laughs when a fan tells her she has a lovely voice: “I don’t even sing in the shower.”

Mendes is indeed meticulous. Often there are more than a dozen people on stage, members of the extended Carney family come and go. Most of them are young, and lively, and Butterworth has given every group of them their own scenes (hence the length). The ensemble is a singular standout through and through, with blonde Tom Glynn-Carney (he had the best hair in “Dunkirk”) a knockout. Some of “The Ferryman” is overwrought, and the ending is a collision, but overall this should be the Best Play of the 2017-18 season. And this is how a real play is written, folks.