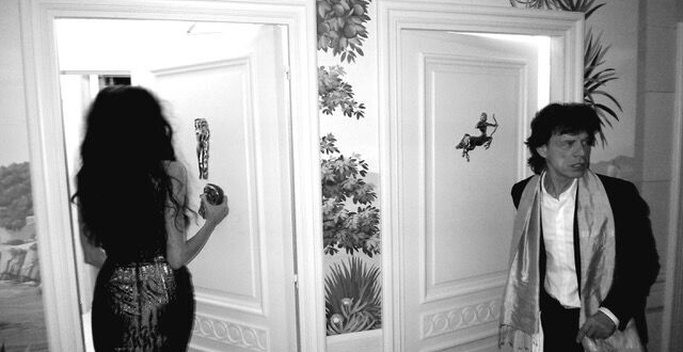 A rare photo of Mick Jagger and his deceased girlfriend L’Wren Scott is up for auction on Paddle 8 for the Elton John AIDS Foundation.

It’s a picture of Mick exiting the men’s room at the Eden Roc Hotel in Cap d’Antibes while L’Wren was simultaneously entering the ladies room. Jagger doesn’t seem to notice Scott.

The photo was taken by Jean “Johnny” Pigozzi, dilettante snapper of stars, who follows Jagger wherever he goes, particularly in Cannes.

There aren’t other prints available right now. The only other source I found for it was sold out. On Paddle 8, it carries an initial bid of $2,400. For Stones fans it would be priceless. It’s also just a great image that maybe sums up what was going on. Scott would go on to commit suicide by hanging herself from a doorknob in her apartment on March 17, 2014.