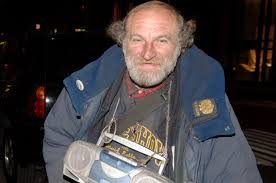 Drake’s “Scorpion” album is the gift that keeps on giving.

Already a monster hit with millions sold and streamed, “Scorpion” has spawned a few hit singles including “In My Feelings” and “God’s Plan.”

One of the hits, “Mob Ties” has already gotten 19 million views on YouTube for its lyric video. So why not shoot a real one?

I’m told Drake has done just that, in the last few days, under the Brooklyn Bridge. The video stars Barry Keoghan, the up and coming Irish actor who made a big impression in “Dunkirk” and “The Killing of a Sacred Deer.”

Also starring is Radio Man, aka Craig Castaldo, the beloved autograph hound and fan who movie stars love and who frequents their sets. Radio Man tells me he was paid just $200 to appear in the video with his trademark boombox hanging round his neck on a chain.

“They make it seem like they’re playing Drake’s music through my radio,” Radio Man told me as he waited to meet Steven Spielberg in front of City Winery last night. “I’m a star!” Radio Man has appeared in many movies and is thought to be the inspiration for Robin Williams’ character in “The Fisher King.”