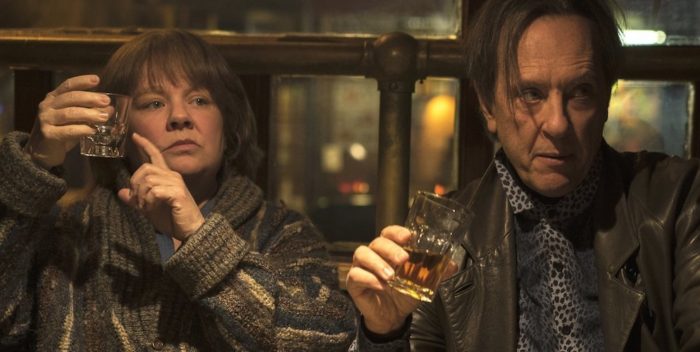 Melissa McCarthy gives a powerhouse and poignant, weaved in with her comedic caustic wit performance in “Can You Ever Forgive Me.”  Not only do we fall in tortured love with failing writer Lee Israel, but we also admire her and respect her for her honest to a fault and ‘calling it like it is’ manner.

Set in 1991 in NYC, which director Marielle Heller captures perfectly, “Can You Ever Forgive Me,” is based on Lee Israel’s memoir of the same name.  The script is wonderfully written by Nicole Holofecener and Jeff Whitty.  The film opens with a demoralized Lee struggling to pay her bills, with her beloved cat Jersey being sick.  She spends a lot of time at her favorite watering hole, Julius, a legendary gay bar that is still around in the East Village.

Lee meets the charming; sly and messed up Jack Hock, played perfectly by Richard. E. Grant; the damaged duo quickly become fast friends. Even though she’s had one of her noted biographies on the New York Times Best-Seller list, her exasperated agent Marjorie, played perfectly by Jane Curtin, can’t find a publisher for her latest book a biography of Fanny Brice, the vaudeville comedienne, a labor of love for Lee.

While she’s  doing research in a library, Lee comes across a personal letter that was left between the pages of a book, and realizing it’s worth something, she sells it to a love/fan struck woman who runs a bookshop, played beautifully by Dolly Wells. And then it’s off to the races for Lee.  Realizing that her talents as a writer can make her money forging personal letters from notable figures, like Dorothy Parker and Noel Coward, she goes with it until it invariably goes wrong.  By then she recruited Jack as her partner in crime, ultimately leading to the FBI involvement.  They get caught red handed.

McCarthy and Grant are both simply stunning. Heller, with an expert sense of pacing, makes a dynamic film that captures the mood of New York in every choice she makes.  Melissa McCarthy shows all sides of Lee; wounded, vulnerable, funny, smart, kind, all of it.  She knocks it out of the park.  No doubt she and Grant along with the filmmakers will be recognized mightily during the awards season.

Fox Searchlight’s “Can You Ever Forgive Me” opens in limited release today.