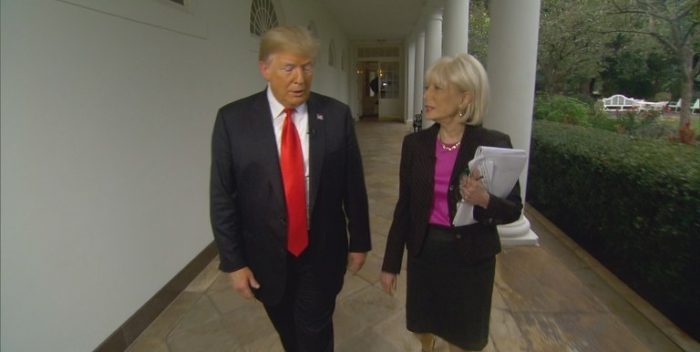 Lesley Stahl’s “60 Minutes” interview with Donald Trump put the newsmagazine at number 1 for the night.

The only thing 60 Minutes” didn’t beat was football. The total was 11 million viewers.

Stahl’s piece crushed ABC’s “20/20” interview Friday night– and not just in ratings. Stahl’s interview was a superior piece of TV journalism. She covered as much as she could, she stood her ground, and she didn’t let Trump get away with anything.

We learned more of the same, basically– that he’s rude, dismissive, arrogant. His line, “I’m the president, you’re not,” was priceless. So was his assertion that he doesn’t really care about Dr. Christine Blasey Ford, because “we won”– that’s Trump in a nutshell.

Trump allowed the interview to try and appeal to the non Fox crowd– people with a pulse, brain wave, educated– that he’s reasonable so the Republicans would prevail on November 6th. I don’t think that it worked. But we’ll see on election day.