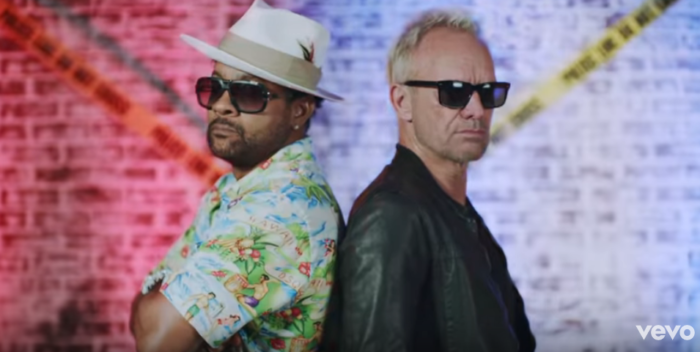 Many. many moons ago Sting co-starred with Melanie Griffith in a Mike Figgis classic called “Stormy Monday.” If you’ve never seen it, it holds up really well.

Sting and Melanie have remained friends all these years. Now Sting and Shaggy have a new hilarious video for their hit “Gotta Get Back My Baby” that is literally six degrees of Melanie.

For one degree, the video directed by Michael Garcia is an homage to “Miami Vice,” which starred Melanie’s ex-husband Don Johnson. For a second degree, the video stars Steven Bauer, who is also a Melanie ex-husband, as the police captain who reluctantly lends the bumbling cops his Spyder sportscar so they pursue a sexy villain.

And what does Shaggy say at the end of the video? You’ll have to watch to hear those fateful words.

PS Sting is the rare rock star who doesn’t care for sunglasses. He mentioned that to me recently at his New York show when his manager Martin Kierszenbaum gave him a new pair for his birthday. But that may be the pair that turns up in the video!