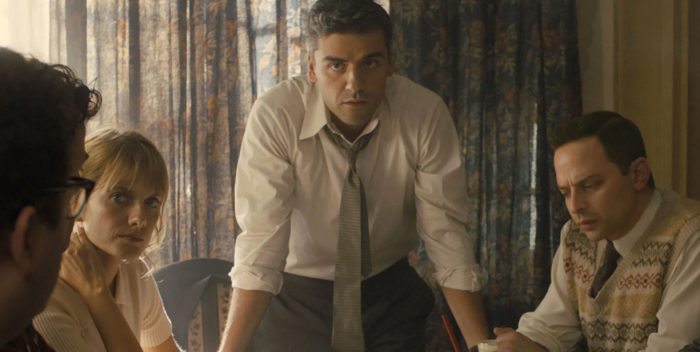 Oscar Isaac– we’ve known him for what seems like a long time, he’s one of the best and the brightest of this generation’s movie stars.

You know him from “Star Wars” where he’s Poe Dameron, ace pilot and hot head. Next month he’ll open in “Life Itself” from “This is Us” creator Dan Fogelman. But next week he stars in a serious World War II thriller called “Operation Finale” which Isaac produced with his manager, Jason Spire. It was a labor of love that turns out to be a searing, engrossing film about the hunting of real life international criminal and Hitler henchman Adolph Eichmann in Argentina some 15 years after the war ended. It’s a must-see film that has awards buzz written all over it.

There could be an Oscar for Oscar. That alone is a tantalizing idea.

Although many people remember Eichmann’s trial, which was broadcast on television, few people remember the details of “extracting” Eichman from his Argentinian home, where he’d been hiding since WWII. Argentina was a haven for Nazi war criminals, where they were protected and hidden.

It’s a credit to the film that even though most viewers will know from the beginning that Eichmann will stand trial in Israel — at least most people of a certain age — the moviei unspools like an old-fashioned thriller and never lets up the suspense in its nearly 2 1/2 hours running time. The pace is helped immeasurably by the fantastic soundtrack by legendary composer Alexandre Desplat.

In the intro to the screening Weitz quipped, “American Pie…. Operation Finale.”
“It was a labor of love and unfortunately fairly timely,” said the director, adding,  but there’s some laughs as well.”
“At the risk of offending various actors and crew members,” Weitz said he wouldn’t thank them individually. “Except for one actor who I must mention, which is my mother who appears in this film in a clip from ‘Imitation of Life.’ Thank you Mom for agreeing to be in this film.” Weitz’s famous mother is Susan Kohner, who starred in “Imitation of Life” as a biracial woman trying to pass for white. (His famous father was the legendary mens fashion designer John Weitz. His famous brother is director Paul Weitz.)

At the after party at the luxurious, glass enclosed Lincoln Restaurant, I congratulated Isaac and reminded him that the last time I saw him was at the junket for “The Promise,” about the Armenia genocide, a tragedy he wasn’t aware of before making the film. He knew about the Holocaust of course but was happy to be involved this film at a time  when Holocaust denial is on the rise in Europe, along with anti-Semitism, racism and anti-immigrant sentiment. “A lot of young people don’t know about this period of history,” he told me.

Other guests from the film included Melanie Laurent, Haley Lu Richardson, Nick Kroll, Lior Raz, Michael Aronov and Torben Liebrecht. Liebrecht plays a Mossad agent, is German and not Jewish. He told me the main draw in making “Operational Finale” was the large international cast and the attention to historical authenticity and fact.
“Operation Finale” opens next Wednesday, August 29.