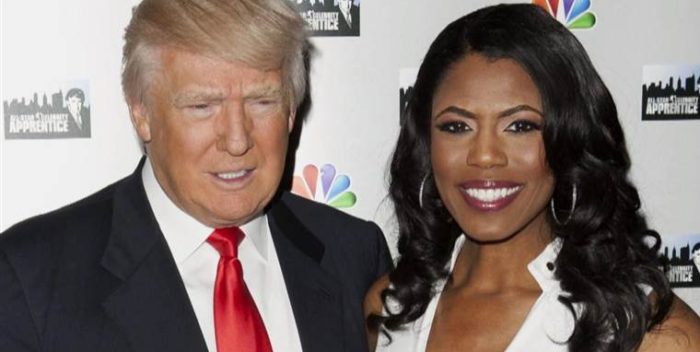 SUNDAY PM UPDATE: “Unhinged” has risen to number 16 on amazon based on advance orders. Evidently, people who saw her on Meet the Press believed her.

SUNDAY UPDATE: Omarosa appeared on Meet the Press this morning. She says that since she finished her book and it was published she’s heard the tapes of Trump using the “n” word. She has her own tapes of General Kelly firing her, among other things. She told Chuck Todd she’d love it if the White House released her human resources record. “Unhinged” is at number 36 on amazon.com. right now. She appears on The Today Show tomorrow morning.

But Trump’s usual lowbrow sticks and stones inarticulate put down won’t work this time. “Unhinged” is already number 37 on Amazon, and 164 on Amazon’s Kindle service. She appears Sunday morning. By Tuesday when the book is released, “Unhinged” will be number 1.

NPR reports that Omarosa may have already contradicted herself in an interview with them vs. what’s in the book. But the fact is, Omarosa has had more access to Donald Trump than most over the last generation. Once she competed in “The Apprentice,” she stuck around to do Trump’s bidding.

Salacious? Unverifiable? Something tells me Omarosa is going to win a TKO in this round. Trump can call her all the names he wants. She has the goods. He gave them to her.