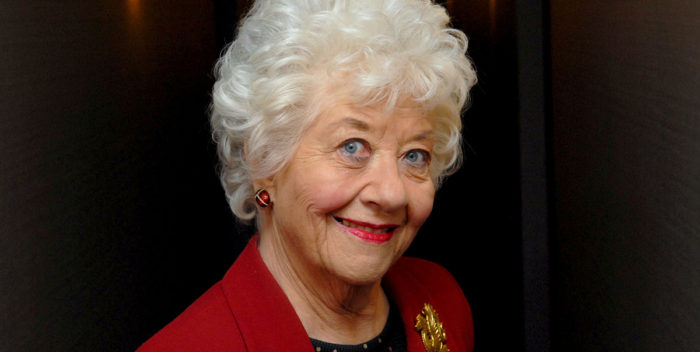 No kidding. This morning NBC announced it was going to reboot the terrible 80s sitcom “The Facts of Life.” The news has apparently killed actress Charlotte Rae, 92, star of the hit back in the day.

Seriously, what a weird juxtaposition. Before she got started playing Edna Garrett on a bunch of different NBC shows in the 80s, Charlotte Rae was a widely respected character actress. In the 1960s she was nominated for a Tony as Best Actress in a Musical and in a Play. She was also nominated for an Emmy in the famous TV movie, “Queen of the Stardust Ballroom” with Maureen Stapleton and Charles Durning.

Rae was also nominated once for playing Mrs. Garrett, probably because of the goodwill she’d engendered in show business. It was not a great role or a good show, but Rae made the best of it. She’d been a constant on the small screen since the 50s, starting with “Car 54 Where Are You?” Charlotte Rae was funny and likeable, and you knew behind the screwball stuff she was delivering there was a real comedy intellect.

Her last role was in Jonathan Demme’s “Ricki and the Flash,” a movie I quite liked, with Meryl Streep. A lot of people had forgotten she was still around, but she still had “it.”She published a very readable memoir that year called “The Facts of My Life.” She says of the late child actor Gary Coleman, “his parents worked him like crazy.” In her younger days she was great pals with Cloris Leachman– they were roommates in New York– and Charlotte also talks about the Black List.

A great life, a great career– and a sentimental goodbye to Charlotte Rae!